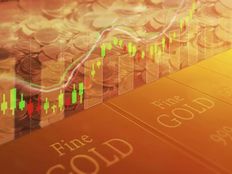 Gold has seen its price climb lately due to inflation, a looming recession, widening credit spreads, and general economic uncertainty. John Hathaway’s latest for Sprott Insights posits that the yellow metal is still dramatically undervalued and that the sanctions that followed the Russian invasion of Ukraine threaten to reshape the U.S. dollar’s global dominance, opening the door for gold-backed currency to make a resurgence.

The last two years have been good to gold, with the March 31 price of $1,937 exceeding the $1,825 monthly average record set in August 2011. However, adjusted for inflation, that August 2011 price would be $2,328 today. The investment fundamentals for gold have clearly improved since then, so Hathaway sees this as a clear sign of significant upside for gold and its related equities.

How Russian Sanctions Could Bolster Gold

The USD has long been the dominant global reserve currency, representing 59% of the world’s allocated reserves. When Putin ordered the invasion, Russia was hit with numerous economic sanctions from Western nations. The U.S., Europe, and Canada prevented the Central Bank of the Russian Federation from deploying its $630 billion stockpile. Hathaway sees this as a potential critical blow in the trust of paper currencies.

“The Russian response announced on March 28 and April 3 circumvents the U.S. dollar to settle international trade. Russia temporarily pegged gold at 5,000 rubles per gram or $1,300/ounce at the time of the announcement,” Hathaway notes. Following that announcement, the ruble rallied 73%, sending a message that Russia was prepared to back its currency with gold.

To import energy from Russia, countries must pay in either rubles or gold, which means that sellers no longer need to park proceeds in U.S. Treasuries. Hathaway says, “the Russia-Ukraine War could mark a tipping point that significantly diminishes the pool of offshore capital to finance U.S. deficits. The repercussion would be a severe mismatch between supply and investment demand for U.S. Treasuries. Two additional factors will exacerbate the mismatch: aggressive Fed balance sheet reduction and unexpectedly high deficits caused by the impending recession.” Hathaway also notes that many experts, including famed economist Mohamed El-Erian, think that it will be impossible for the Fed to thread the needle between taming inflation and causing a recession.

All of this sets the stage for significant devaluation of the U.S. dollar against gold.