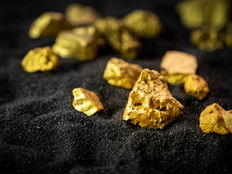 For much of the summer, investors have been anticipating gold to surge. But the waiting game continues. After starting the month of August at $1,814.19/oz, August was a wild ride for the yellow metal. Though full of sound and fury, the month amounted to nothing. Going into September, gold sat at $1,813.62. Still down 4.46% YTD.

Mining equities took a major tumble in August, losing 6.46% and are down 9.50 overall.

*Mo & YTD % Chg are expressed in basis points, BPS, rather than percentages.

In a report on Sprott Insights, market strategist Paul Wong noted that gold’s wild month started early, with NFP (Non-Farm-Payrolls) having a stronger than expected growth number of 943,000 compared to the 877,000 consensus. “Gold sold off $41.38 on the NFP print, a surprisingly sharp move considering that employment numbers are lagging indicators and generally volatile. Given that more than 9 million jobs were lost during the COVID pandemic, these new jobs are recovered rather than created, a qualifying fact well communicated by the Federal Reserve.”

This set up a “flash crash” on Sunday, August 8th, putting bullion at its lowest point. Wong asks in his report, “Why would someone try and sell about $4 billion of gold contracts on an early Sunday evening in August, knowing that liquidity would be near non-existent? We heard several reasons (fat finger, forced liquidation, short selling), but none made much sense in the absence of all the details. Typically, a flash crash of this type is not sustainable once liquidity returns, during regular trading hours, without a solid reason to sell down further. By the end of the week, gold had recovered from the flash crash.”

The recovery from the flash crash leads to some bullish reversal patterns. The Fed was also surprisingly dovish in their tapering message at the end of the month.

Wong points out that, “Both silver and gold mining equities have drifted following the June Federal Open Market Committee FOMC, but the flash crash saw liquidity fall away further. Liquidity had been in decline prior, and mysterious Sunday night flash crashes will only increase investor wariness. The pending Fed announcement on the taper schedule was also not helpful. The tapering concern had weighed disproportionately heavily on the precious metals complex due to the memory of the 2013 Taper Tantrum.”

Despite the solid financial conditions of many mining companies and robust dividend payouts frequently north of 2%, smaller mining firms underperformed compared to large-cap stocks. The long-term prognosis looks solid for mining companies despite the pressure, and Wong believes investors will likely re-rate these stocks more appropriately.

Tapering fears have put gold in a miasma all year. According to Wong, “In the long run, the potential impact on gold from fewer billion dollars of asset purchases per month seems way overblown when considering the scale, scope and future direction of central bank asset purchases.”

If inflation begins to set in, the Fed will tighten and reign in the recovery or risk real inflation. Wong sees gold as providing options in either scenario.

Despite all the movement and hang wringing in August, gold remains well-positioned in these chaotic times. Wong thinks that “In the not too distant future, there will undoubtedly be a growth scare that may delay or defer tapering and rate hike expectations and even possibly add new stimulus measures. If this were to occur while inflation was still reasonably hot, fears of stagflation would start to percolate. As we edge closer to tapering, the next question will coalesce around whether the Fed can start to tighten without severe market disruptions. The Fed’s recent 2018 experience and the medium- and long-term experience of the ECB and BoJ all point to a firm no.”