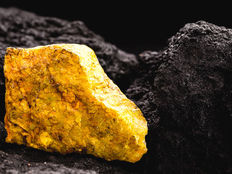 Invest in Uranium To Invest in the Future

The Sprott Physical Uranium Trust is up 45.7% since its July 19th inception. It is the largest physical uranium fund in the world and a convenient way for investors to get exposure to a substance that could be critical to the world in the years to come. Uranium has a fascinating history, but its present and future are also compelling.

Initially discovered over two centuries ago, it was originally used to tint glass and color ceramics. In 1895, Wilhelm Rontgen discovered X-rays by accident, forever altering the landscape of medicine. Marie and Pierre Curie discovered the elements of radium and polonium three years later. When Einstein put forward his iconic theory relating to mass and energy, uranium was on an unavoidable trajectory. Less than a decade after the Manhattan Project built the world’s first atom bomb, the Experimental Breeder Reactor generated the first electricity created by nuclear power.

Uranium’s Role in the Green Future

The road to net zero emissions could be paved with uranium. It is a dense, abundant substance that has the capacity to power the world without carbon dioxide emissions. A single gummy bear-sized pellet of uranium can create the same amount of energy as 17,000 cubic feet of natural gas, a ton of coal, or 120 gallons of oil. This makes it incredibly efficient.

For example, you could generate roughly the same amount of power from a single nuclear reactor taking up approximately a square mile of land as you could from 431 utility-scaled wind turbines, or 3.1 million solar panels. The turbines would require roughly 360 square miles of land, the solar panels about 75.

The Investment Case for Uranium

Uranium is highly abundant, making up about 2.8 parts per million in the Earth’s crust. This makes it 700 times as common as gold. So how could that possible translate to demand? Well, in 2020, mining production was only able to cover 74% of the world’s current reactor requirements. When you consider that the demand for electricity is only going to keep rising and the global push to pivot to green energy is only going to grow stronger as climate change’s effects become more obvious, the demand for nuclear power is going to surge.

Other renewable energy sources can’t match nuclear power for output and have bigger emissions footprints to bring online. Solar and wind are both subject to the whims of weather, while nuclear power can stay online most of the time, regardless of cloud coverage or wind speed.

A uranium investment isn’t just sound fiscal decision-making, it’s an investment in the future of the planet.