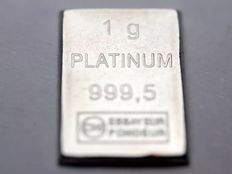 Palladium and platinum are at a crossroads as the situation in Russia has led to an unusual dislocation between the two main palladium markets.

This price dislocation is not unlike the 2020 precious metals market chaos from when the start of the pandemic grounded flights and forced a number of shutdowns. This had bullion banks concerned that they wouldn’t be able to ship metals from London to the U.S., creating price dislocation between the two markets.

Russia accounts for roughly 25%-30% of the global palladium supply. Though Russian palladium hasn’t been sanctioned and only new ingots are facing restriction, traders are worried that Russian-branded bars will be hard to move. “Self-sanctioning” has started playing out across the commodity markets as individual companies create their own stances that may go beyond what is required by a government when it comes to policy around Russia. Traders are concerned that buyers and manufacturers will be wary of anything from Russia. Futures prices have already been affected, as the U.K. has started issuing steep import tariffs on Russian palladium.

Palladium and platinum are instrumental for automakers. They are critical components in catalytic converters in gasoline-powered cars, and platinum is also used in fuel cells for electric vehicles. At roughly $950 per ounce, platinum is much more affordable than palladium. “The substitution effort has gone up hugely,” said Trevor Raymond, the WPIC’s head of research. “The amount of savings an automaker can make are massive. What’s been added on top of that is concerns about availability (of palladium).”

Throughout the first quarter, platinum demand plunged 26%. As companies start substituting platinum for palladium, demand should increase, creating a unique buying opportunity. The Sprott Physical Platinum and Palladium Trust (SPPP) holds physical platinum and palladium, and is worth keeping an eye on amid the ongoing war in Ukraine and the global clean energy pivot.