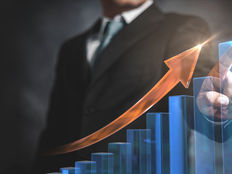 Breaking through the $1,800 price ceiling is so close, but seems so far for gold, but the threat of stagflation could allow for the precious metal to succeed.

Stagflation, an economic landscape featuring high inflation coupled with slow economic growth, could be just what gold needs. According to a recent Kitco News report, stagflation could be the major tailwind gold needs to smash through the $1,800 level — a $5,500 price prediction was offered by analysts in a report by investment bank Jefferies Group.

“The long-term view here remains the same as it has been for many years. That is that G7 central banks, including most importantly the Federal Reserve, will not be able to exit from unconventional monetary policy in a benign manner and will ultimately remain committed to ongoing central bank balance-sheet expansion in one form or another. Such policies will increasingly discredit those central banks which have pursued unconventional monetary policy, threatening the stability and indeed integrity of the current fiat-paper-money system,” the analysts added further.

Rather than view leading cryptocurrency Bitcoin as a rival to physical gold as a store of value, both could co-exist in the long-term as the government continues to print and pump dollars into the economy. That catalyst for dollar de-valuing could breed an economic environment for assets like gold and Bitcoin to thrive.

“The allocation to Bitcoin has been introduced because it has become clear that it represents a legitimate alternative for risk averse capital looking for a store of value, amidst accumulating evidence of policies of currency debasement in the G7 world,” the analysts said.

“It should also be emphasized again that the investments in gold and Bitcoin are viewed as insurance, not as short-term trades. This is a long-term portfolio, which seeks to balance the long-term risks and opportunities in the current global context,” the report added.