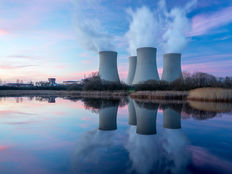 Through Fission or Fusion, Nuclear Energy is the Future

According to the Wall Street Journal, several big names are investing in nuclear fusion. Bill Gates and George Soros have both put money into Commonwealth Fusion Systems, LLC in hopes of staking a claim on what would be a revolutionary development in energy. Commonwealth has raised $1.8 billion, making it the largest private investment for nuclear fusion.

As the world races to find carbon-free energy and attempts to avert the catastrophic effects of climate change, nuclear fusion could be the key to unlocking safe, clean energy. Current nuclear power plants are also emission-free, utilizing a process known as nuclear fission, which splits atoms. Fusion has the potential to create almost unlimited amounts of power by melding atoms with little to no long-lived waste.

Though nuclear waste is not the problem many nuclear skeptics think it is, the energy benefits of fusion are undeniable. “Everything is science fiction until someone does it, and then all of a sudden it goes from impossible to inevitable,” said chief executive of Commonwealth Fusion, Bob Mumgaard.

According to Benioff, “Commonwealth is a very important company because if it works, it’ll help the world accelerate its energy transition.”

There is no doubt that interest in nuclear power is growing. Sprott’s Physical Uranium Trust is up over 38% since its inception earlier this year. As the world begins to transition to low or no carbon power, it is becoming apparent that only nuclear power has the energy-generating ability to maintain the grid and the environmentally friendly emissions levels needed to stave off the worst effects of climate change.

While solar power is limited to when the sun is shining, and wind power is at the mercy of the wind, Nuclear power can run almost indefinitely. It even compares well next to other green sources of power when it comes to emissions created per gigawatt-hour of electricity.

Daniel Poneman, a Senior Fellow with the Belfer Center at Harvard Kennedy School, said in a 2019 article that “Nuclear energy is the largest source of carbon-free energy in the U.S. by a huge margin, and it has a major role to play in confronting the global climate challenge.”