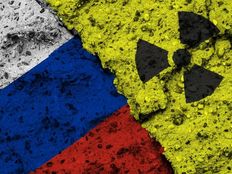 Since Russia invaded Ukraine, uranium prices have soared 30%. Much of this is due to the fact that Russia enriches more uranium for use in nuclear plants than any other country in the world.

Russia’s further isolation on the global stage has upended uranium markets, with other countries trying to find a way to be less dependent on Russian uranium. Some in the U.S. have even considered reviving domestic production. “U.S. utilities rely on Russia enough that you can’t replace Russia overnight,” said Jonathan Hinze, president of UxC LLC, a nuclear industry market research and analysis firm, to the Wall Street Journal.

Nuclear power provides the U.S. with roughly a fifth of its total electricity generation. The global total is about 10%. Uranium is mined in many regions of the world, but very few sites enrich the substance. In the short term, U.S. plants are well set-up. They typically refuel every 18 to 24 months, with two or three years planned in advance. This gives the U.S. time to make up the deficit that will be caused by ceasing uranium trade with Russia. Still, the U.S. relied on Russia and its allies to make up about 46% of its needs in 2020, according to the U.S. Energy Information Administration.

The process for uranium enrichment relies on specialized facilities, and with nuclear power in a long decline, many of these facilities around the world have shuttered their doors. Russia uranium enrichment composes 35% of the global market. Strengthening domestic capacity could take time, according to Adam Rodman, founder of hedge fund Segra Capital Management LLC. “This market has become too comfortable despite a fragile supply chain,” Rodman said.

China has uranium conversion and enrichment plants, but is not a viable option to make up the deficit, as its plants tend to supply their own reactors instead of exporting. The sole U.S. plant in Illinois has been offline since 2017, though plans are in the works to bring it back online by 2023.

An Opportunity for Keen-Eyed Investors

As the effects of climate change become more apparent, the world is going to pivot as quickly as possible to low-emission sources of power. Currently, only nuclear power contains the raw energy capable of maintaining current electricity demands. As the supply chains reshuffle, there’s an opportunity for investors to get in on the uranium market through a fund like the Sprott Physical Uranium Trust. Since inception, the trust has climbed 73.38% and currently has over $3 billion in AUM.