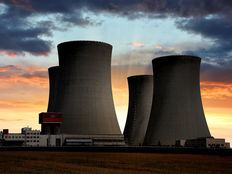 Uranium - The Good, the Bad, and the Radioactive

Sprott released a new episode of Commodity Culture focused on uranium, diving into the scientific origins of the substance and covering its history and role in our future.

Cosmochemists have been investigating the origin of uranium for a long time. New data is sure to arise, but currently uranium is believed to have formed some 6 billion years ago, possibly during supernova events. As stars collapse, they eject their remnants into space, where they can then eventually coalesce into solar systems with planets like Earth. Research also shows that uranium could be formed as the result of a merger between neutron stars. That process leads to the mass production of not only uranium, but gold and platinum as well.

Pure uranium was first isolated by French analytic chemistry professor Eugene Peligot in 1841, though the first extraction of uranium oxide was identified by German chemist Martin Heinrich Klaproth in 1789. Going even further back, the Roman empire utilized uranium oxide as a coloring agent for ceramic glazes in 79 AD.

The Paradoxical Uses of Uranium

Uranium has had two primary uses through modern history: It is a powerful carbon-neutral source of clean energy and an instrument of horrific destruction. It is a substance that could save the world or destroy it, depending on how it is utilized.

Despite being one of the most efficient, cleanest, and safest forms of energy currently accessible on the planet, uranium’s storied history as a weapon of unrivaled destruction and the high-profile disasters of Chernobyl, Fukushima, and Three Mile Island have dented its optics. Even as the world stands on the precipice of widespread environmental disaster brought about high-emission energy sources such as oil and coal, the public is still reticent to embrace nuclear power.

The reality is that nuclear energy actually accounts for a low percentage of overall deaths from energy production worldwide. It has caused significantly less harm than coal, oil, and natural gas. A paper published by NASA’s Goddard Institute in the Environmental Science and Technology Journal in 2013 concluded that 1.84 million lives had been saved from 1971 to 2009 thanks to the reduction in air pollution brought about by using nuclear power instead of burning fossil fuels.

The Paris Climate Agreement has set deadlines for the world to pivot to a carbon-neutral energy grid. There are numerous challenges to meeting these deadlines, and though renewable energy sources such as wind, solar, and hydro will certainly play a role, it will take an enormous amount of work and environmental cost to extract and build those clean, renewable energy infrastructures.

A large-scale pivot to nuclear power, however, is the fastest path to hitting the Paris Agreement goals and maintaining a robust, reliable energy grid.

The Sprott Physical Uranium Trust the world’s largest physical uranium fund. It provides investors with a liquid and convenient way to own physical uranium and play an important role in pivoting the world to green technology.