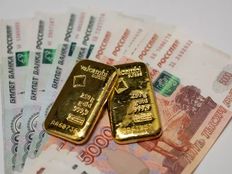 On Thursday, the U.S. clarified that any transaction with the Central Bank of Russia involving gold is a violation of existing sanctions.

Gold, however, can be an untraceable store of value. Brien Lundin, editor of Gold Newsletter, notes that “At least in smaller amounts, Russia could easily sell gold on the open market. In bulk quantities, it could just as easily sell the gold to China with no record of the transaction,” adding that China has demonstrated eagerness to buy gold.

Russia has an estimated $132 billion in gold reserves, in theory this could help finance its war with Ukraine if it can find buyers. The sanctions make it more likely that Russia will have to resort to selling oil to its allies in order to keep the war effort afloat.

Still, some are expressing concern about what could happen if Russia attempts to liquidate its gold reserves. Jeff Wright, chief investment officer at Wolfpack Capital, said that Russia selling a meaningful percentage of its gold would “signal a complete collapse of their economy and banking system — more than the sanctions currently imposed, and a sign of weakness by Russian leadership.”

During the 2014 annexing of Crimea, Russia was also met with sanctions. In that instance, gold prices didn’t budge, but BullionVaults’s Ash said to MarketWatch, “this latest flurry of headlines fits the wider commodity-market narrative of tighter supplies driving prices upwards.”