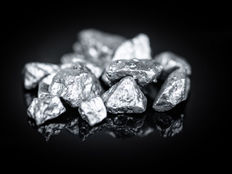 Why Silver Prices Could Surge in 2021

Silver prices are poised to surge 30% this year as global demand for the metal increases, according to a new report from The Silver Institute.

Demand suffered last year, but a late price surge put silver at $20.55/oz, a 27% increase over 2019’s annual average and the highest silver has been priced since 2013. The report’s authors project an average annual silver price this year of $27.30/oz, though the metal could potentially go even higher, up to $32/oz.

In 2020, silver benefited from its status as a safe haven for investors worried about the pandemic’s effects on the market. But with the economy starting to gear up, it’s silver’s utility as an industrial metal that has provided support for its rising price.

Last March, the gold to silver ratio was 127:1, which many experts saw as a sign that it was significantly undervalued.

Despite this, however, overall silver demand declined by 10% last year, down to 896.1 million ounces. Industrial demand fell 5%, though strong demand for silver bars and coins helped physical demand strike a four-year high of 200.5 million ounces.

India’s market was a notable exception. Demand from the country, which has historically been one of the largest consumers of gold and silver, completely collapsed last year, going from 57 million ounces in 2019 to just 9 million.

The World Silver Survey expects silver demand to increase this year by 15% globally, up to 1.03 billion ounces.

“Last year was exceptional,” Phillip Newman, managing director of Metals Focus in London, told MarketWatch. He went on to say that this year “will just remain a strong year,” with the 150 million ounces in ETP investment growth “still pretty sizable.”

One way investors can access physical silver and take advantage of potential price increases is through the Sprott Physical Silver Trust (PSLV ), which holds London Good Delivery bars custodied at the Royal Canadian Mint. Each share of the fund represents a fraction of ownership in those bars.

As of January 31st, 2021, PSLV held 98,208,680 ounces of silver worth $2.52 billion dollars, according to the fund’s most recent factsheet. Year to date, PSLV is up 0.54%, placing it among the top five performing ETFs in ETFdb’s Precious Metals category.