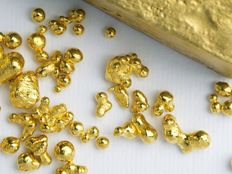 With Deflation Considered, Gold Could Shake Its Slump

The strong U.S. dollar continues to curb any momentum gold can muster, as the precious metal tumbled 3% last week after looking like it might shake out of its summer slump.

“Gold’s poor performance despite the greatest inflation in 40 years may show that the metal, considered a store of value, has been anticipating enduring deflation and is resuming its propensity to outperform most commodities,” Bloomberg Intelligence senior commodity strategist Mike McGlone said, noting that gold is still early in its recovery against copper and crude oil and that its future looks promising.

“Our analysis with wheat shows the metal’s tendency to surpass other commodities,” McGlone said. “The juxtaposition between the ephemeral wheat-price spike in 1H and the store of value, gold, may play out in the metal’s favor in 2H, with enduring implications. A key economic gauge for 2H may come from whether the gold vs. Bloomberg Commodity Spot Index ratio will recover from a support zone that has held since 2008.”

McGlone sees gold as a possible beneficiary in the event of a global recession, which is looking more and more likely. Gold is often thought of purely as an inflation hedge, but in reality it is a broad defensive play against a number of troubling economic developments. Much of this is due to gold’s long history as a stable store of value. “The gold-to-copper price ratio may be in the initial stages in 2H of climbing from an enduring support level,” McGlone noted. “That the price of copper and the Nasdaq 100 Stock Index are both down about 20% in 2022 to Aug. 19 may portend the resumption of more enduring deflationary forces and buoy gold.”