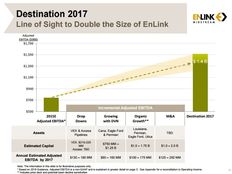 Does EnLink Have What It Takes to Double in Two Years?

Perhaps it’s due to my history as a college cheerleader for a football team known for its losing streak, but I have always been unshakably optimistic and confident about the future. (Maybe it’s having Lou Gehrig as a fellow alum that adds the tenacity.)

So, when reviewing the slides from EnLink’s recent analyst day (available here), I was pretty impressed with their plan to double EBITDA in just two years. And, to my surprise, a bit skeptical.

Management held one analyst day for both EnLink Midstream LLC (ENLC), the general partner, and EnLink Midstream Partners (ENLK), the MLP. In addition, Devon Energy (DVN), the majority owner of both companies, sent its COO David Hager to speak.

Woah, right? EnLink is expecting to go from $740 million in adjusted EBITDA to $1.4billion?! For comparison, MarkWest Energy Partners (MWE) is also a gathering and processing MLP and is currently twice the size of ENLK on a market cap basis ($13.3 billion to ENLK’s $6.9 billion). In 2015, MWE expects to generate just under a billion dollars in adjusted EBITDA.

To generate that incremental $660 million of adjusted EBITDA, EnLink is going to need to raise roughly $5 billion of capital. Where are they going to get cash like that? Well, ENLK has an investment grade credit rating and a $1.5 billion revolver, making it one of the few companies with access to that kind of capital.

Financing aside, in order for that incremental adjusted EBITDA to hit $660 million, EnLink is going to have to come in on the high end of the range in its growth categories (drop downs, DVN growth, organic growth, and M&A). Coming in at the midpoint would provide an additional $605 million, while hitting the low end of the range would net $445 million.

Devon is a big part of EnLink’s current business, as well as a big part of the growth plan. EnLink expects $155 million in EBITDA from the dropdown of the VEX and Access pipelines from Devon. Additionally, EnLink plans to grow with Devon to the tune of $125 million in the Cana, Eagle Ford, and Permian basins, building the midstream assets DVN needs. Taking dropdowns and organic growth together, that’s nearly half of the expected growth.

Organic growth outside of Devon’s footprint will be focused in the Gulf Coast, Permian, and Ohio River Valley. That adds another $137.5 million.

In order for EnLink to reach its goal of doubling adjusted EBITDA by 2017, it will need another ~$242.5 million, assuming everything else hits the midpoint of the range. DVN may be a huge part of EnLink’s growth via the traditional MLP channels: organic growth and sponsor dropdowns. But if management is serious about 2x growth, they’ve also got to be serious about M&A.

They are. Management indicated that near-term deals would be focused around its current footprint, while longer-term they would focus on entering a new basin—specifically one in which Devon is active. If you compare the asset maps available on their websites (here and here), reproduced below, it looks like EnLink will be heading west.

By this time in 2017, if EnLink has hit its goals, I’ll bet you a backflip that it also owns assets in the Rockies.