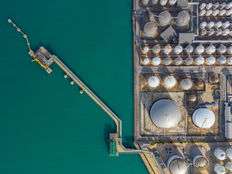 Much has been written about the strong dollar, which has been bolstered by rising interest rates and a flight to safety amid recession concerns and weakness in Europe. A strong dollar has far-reaching implications for earnings, trade, and commodities priced in dollars, including oil.

Typically, dollar strength or weakness takes a backseat to other fundamental factors driving oil prices. Afterall, oil is much more volatile than the dollar. Aside from currency movements, oil prices are impacted by supply-demand fundamentals, geopolitical news, paper trading, and other headlines that can have a bigger impact on the day-to-day change in oil prices. However, with dollar indexes reaching 20-year highs, the strength of the dollar adds important context to the recent weakness in oil prices. Recall, a stronger dollar puts downward pressure on oil prices, while a weaker dollar is supportive for oil prices. The ten-year inverse correlation between oil and the Bloomberg Dollar Spot Index (BBDXY) is -0.19.

The chart below shows West Texas Intermediate (WTI) oil prices and BBDXY since oil’s relative high at $122 per barrel on June 8. The two lines are practically mirror images of each other, though it bears highlighting that oil prices have fallen 16.0% and the dollar index has gained 4.0% over the period shown in the chart. Dollar strength has clearly not been the only factor weighing on oil prices since early June – significant selling and profit-taking by traders, recession concerns, and false starts around easing lockdowns in China have also pressured oil. That said, the strong dollar has played a contributing role in oil’s pullback.