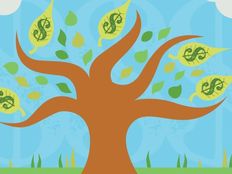 With market and energy volatility continuing, today’s note follows up on last week’s piece on MLP leverage by examining two prevalent questions emerging from the current market environment: 1) Are any MLPs facing refinancing risk due to near-term debt maturities? and 2) What happens to index yields in various distribution cut scenarios? Today’s piece addresses these questions by examining the timeline of MLP debt maturities and providing a scenario analysis of index yields with various distribution cut assumptions for the constituents of the Alerian MLP Infrastructure Index (AMZI).

When is MLP debt coming due?
During periods of market volatility, balance sheets come under increased scrutiny as investors try to evaluate the overall health of a company. Last week, we examined the improved positioning of MLPs compared to the previous energy downturn in 2014-2016, highlighting reduced leverage metrics. Leverage provides a high-level snapshot of balance sheet health. To better frame potential short-term refinancing risk, this analysis focuses on how much debt is expected to mature within the next few years for each constituent of the AMZI. Credit facilities were examined to further gauge financial flexibility. In sum, there is about $17 billion in debt maturing in 2020-21 for the index, making up 12.2% of total debt. Over the next five years, that number increases to more than $50 billion and comprises 36.4% of total debt (see charts). Please note these numbers reflect the AMZI constituent changes announced last Friday, with the debt of Holly Energy Partners (HEP) and CNX Midstream Partners (CNXM) included and Tallgrass Energy (TGE) excluded. As a caveat, this analysis does not account for any new debt issuances needed to fund contemplated projects, though we expect capital spending to see further reductions in response to lower commodity prices.

Taking a closer look at debt expiring over the next two years.
The drop in oil prices combined with worsening market conditions more broadly has been impactful for energy corporate debt, particularly for issuers with lower credit quality. Year-to-date through March 12, the S&P US High Yield Corporate Bond Energy Index has fallen 30.1% compared to a 13.1% decrease for the S&P 500 Investment Grade Energy Corporate Bond Index. Notably, the majority of the AMZI – 68% by weighting – has investment grade ratings from S&P (see Appendix). Midstream is better insulated from weak commodity prices due to the fee-based nature of cash flows and contract features like minimum volume commitments. However, commodity price weakness raises counterparty risk concerns, and an environment with growing production is more constructive than one in which volumes are contracting. With markets skittish, it will likely be more difficult to refinance impending maturities of debt in the short term.

As shown in the table below, approximately half of the index (11 out of 21 constituents pro forma for the March index rebalancing) has debt maturing in 2020 or 2021. Focusing on 2020, DCP had $600 million in senior notes that matured on March 15. When asked about the impending maturity on the company’s 4Q19 earnings call in February, management noted it had options to cover using its revolver or an offering, but it has not done an offering since then. Enable Midstream Partners (ENBL) also had $250 million due on March 15. ENBL completed a $550 million note offering in September 2019, with use of proceeds including repayment of the 2020 notes. Additionally, Enterprise Products Partners (EPD) and NuStar Energy (NS) have $1 billion and $450 million, respectively, due in September. In addition to ENBL, multiple constituents completed debt offerings in 2H19 or early 2020 to refinance 2020 maturities, including Plains All American (PAA), Energy Transfer (ET), Phillips 66 Partners (PSXP), and Western Midstream (WES).

MLPs also benefit from significant availability in their credit facilities, many of which remain lightly utilized. On average for AMZI constituents, about 66% of credit facility capacity has not been drawn as of the end of 2019, which provides another source of flexible, short-term financing. As of December 31, 2019, there were seven AMZI constituents that had utilized more than 50% of their credit facilities: CNXM, Energy Transfer (ET), Genesis Energy (GEL), HEP, NGL Energy Partners (NGL), Shell Midstream Partners (SHLX), and Western Midstream Partners (WES).

While a few MLPs have debt maturing in the short term, the maturities for the balance of this year appear manageable. The relatively low principal maturing this year provides some cushion for MLPs to adjust to volatile market conditions and take a patient approach to debt financing. For the MLPs with higher amounts due over the next two years, the debt levels do not appear burdensome when considering revolvers and other sources of liquidity that can be utilized to cover their obligations.

MLP yields compare favorably to other sectors even under austere scenarios.
While financial markets are poised to become even more starved for yield, MLP yields have increased to all-time highs. MLPs are either mispriced or the market is pricing in some level of distribution cuts – perhaps the index yield reflects a mix of these. Typically, MLPs begin announcing their next quarterly distributions in mid-to-late April. In the meantime, companies may provide updated commentary, such as HEP’s 8-K from yesterday that included an updated presentation with guidance for a flat distribution in 2020 and more context around its contracts. For MLPs with upcoming debt maturities or elevated leverage, shoring up the balance sheet may take priority over growing or even maintaining their distributions in the current market environment.

What happens to the index yield if AMZI constituents cut their distributions to improve their financial positioning? To evaluate this, we ran scenario analyses for the yield of the AMZI Index assuming cuts from constituents with above average leverage and cuts by every constituent. This analysis is based on the current 20 index constituents and does not reflect the announced constituent changes. TGE’s yield is included at 0% since it suspended its distribution pending the close of its merger transaction in 2Q20. In short, MLP yields remain higher than other income-oriented sectors even if there are sharp cuts by every constituent. To be clear, these scenarios do not reflect Alerian’s base case assumptions but are extreme scenarios for illustrative purposes. The chart below includes the actual index yield as of March 12 of 18.3% along with two scenarios. One scenario assumes all MLPs with greater than 4x leverage cut their distributions by 50%, and the other assumes those same MLPs cut by 75%. In both cases, the AMZI’s yield is still well above those offered by REITs, utilities, or bonds. Even in the more aggressive cut scenario, the index’s yield is still 710 basis points above REITs and 760 basis points above utilities.

Putting leverage aside, what happens in scenarios where cuts are applied to the entire index? The chart below extends the 50% and 75% distribution cut to every AMZI constituent. While these yields of 9.2% and 4.6%, respectively, are far lower than in the previous analysis, they still represent premiums to REITs, utilities, and bonds. Additionally, keep in mind that MLP distributions are typically tax advantaged (read more).

To reiterate, these scenarios provide context around the elevated yields of the sector rather than representing a base case assumption. While some MLPs may cut their payouts, particularly if US energy markets remain pressured for a prolonged period, we see an extreme scenario of 75% cuts by every constituent as very unlikely. Given the significant company-level improvements made in recent years, including higher distribution coverage (read more), the wide elimination of incentive distribution rights (read more), and the shift to self-funding equity capital expenditures, the space remains better positioned for a downturn than in the past and is more insulated from absolute commodity price weakness than other energy sectors (read more). However, the longer this downturn lasts, the greater stress across the energy value chain. In lieu of updated guidance from companies, these scenario analyses provide “what if” context to a market grappling with many uncertainties.