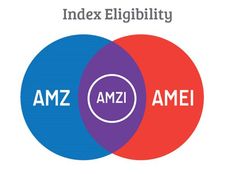 MLPs Are Not An Asset Class. Here’s what happened in April to prove it.

What’s the difference between these indices? The AMZ tracks 50 energy MLPs across all subsectors, the AMZI tracks only energy infrastructure MLPs, and the AMEI tracks 30 energy infrastructure companies (C corporations and MLPs) across all structures. How is that reflected in the actual results? Here’s the dispersion of April performance for each constituent of these indices.

The AMZ has the largest dispersion (-25% to +29%), which you would expect given the large number of constituents and exposure to diverse energy subsectors such as upstream and marine transportation. The AMZI has the tightest dispersion (0% to +14%), as it is the most tightly focused index, composed of only midstream energy companies which utilize the MLP structure. The AMEI is between the two (-3% to +14%), which makes sense because it covers less of the energy value chain than the AMZ, but includes more geographical diversity and capital structure diversity than the AMZI. As companies get more creative (including the use of YieldCos as yet another structure, for example) the distinction between an asset class and a tax structure becomes much more relevant from a benchmarking perspective.

If we examine the new filings and IPOs, it’s obvious that the MLP structure is not being used exclusively by midstream names and should no longer be collapsed with them. On April 1st (no foolin’), CNX Coal Resources (proposed ticker: CNXC) filed its S-1. It is a coal MLP formed by CONSOL Energy (CNX) with longwall mines in Pennsylvania. Given that natural gas-fired electricity generation has been steadily displacing coal in the US, and the fact that CNXC’s coal is primarily sold for domestic electricity generation, CNXC expects to compete on the basis of low cost of production combined with lower transportation costs due to the location. It’s a vote of confidence for the structure given that there are only five coal MLPs currently trading (out of 123 energy MLPs) and only one, Alliance Resource Partners (ARLP), is an AMZ constituent.

Enviva Partners (EVA) completed its IPO on April 28th, pricing 10 million units at $20. As a manufacturer of wood pellets for electricity generation (particularly popular in the UK), EVA is the first of its kind for the MLP structure. There have been timber MLPs before, notably Pope Resources (POPE), but EVA is the first wood pellet manufacturing MLP. Traditionally, companies involved in wood, paper, timber, or power generation are not eligible for the Alerian Index Series.

Black Stone Minerals (BSM) also completed its IPO this month, pricing 22.5 million units at $19. As an oil and gas mineral and royalty company, BSM owns the rights to the production and sale of the hydrocarbons under particular pieces of property. It leases these to E&P companies for an upfront cash payment, plus 20%-25% of production or revenue from production. Aside from identifying the existence of minerals or natural resources, this is about as close as it gets to the beginning of the energy value chain.

None of the four companies mentioned above are traditional MLPs. They focus on a wide variety of commodities and rarely operate midstream assets. However, each management team or sponsor has seen a value in utilizing the MLP structure. Similarly, StoneMor Partners (STON), an MLP which owns and operates cemeteries and funeral homes, compares itself to other MLPs and to the AMZ in its investor presentations.

This may be an accurate comp from a structural perspective, but most people would agree that refined products pipelines and cemeteries do not belong in the same asset class. So, if you are looking to find a peer of say, Magellan Midstream Partners (MMP), TransCanada (TRP and TCP) is a better choice than STON. Despite the fact that both MMP and STON are MLPs, the more accurate comparison would be with TRP. MMP and TRP may have different structures and operate in different countries, but they are both energy infrastructure companies.

At Alerian, we strive to provide the most useful and rigorous indices possible. For those looking to track energy companies using the MLP structure, the AMZ is an excellent choice. For those focused on energy infrastructure and midstream assets regardless of structure, the AMEI follows that space. And for those looking to track midstream energy MLPs, the AMZI has been incredibly popular. To see our full suite of available indices, please visit https://alerian.wpengine.com/indices/.