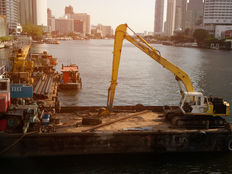 Construct a Bridge to Leveraged Gains With DOZR

Infrastructure has been a popular topic this year as the trillion-dollar spending bill tries to push through the House of Representatives, and now traders can seize the opportunity with leveraged exchange-traded funds (ETFs).

One such fund has made its way into the market: the Direxion Daily US Infrastructure Bull 2X Shares (DOZR C+). It gives traders the ability to trade infrastructure in one position instead of having multiple plays on varying components of the infrastructure bill.

There are many ways that traders can slice and dice opportunities in the bill. They can play renewable energy, electric cars, raw infrastructure improvements in roads/buildings, and a multitude of other opportunities.

DOZR is able to encapsulate all these iterations of infrastructure plays with one fund. It also adds a double dose of risk or reward with twice the exposure to its index, the Indxx US Infrastructure Index (IUSINFI).

Companies that derive a minimum of 50% of their total revenue from construction and engineering services or industrial transportation are eligible for inclusion. The index provider screens companies based on various market capitalization and liquidity metrics and selects the top 100 securities by market capitalization.

Betting on the Infrastructure Bill

DOZR is sure to get lots of action this year as the debate to pass the bill goes on in Capitol Hill. That said, there could be plenty of volatility to be had as the bill could undergo a number of changes in order to pass through Congress.

At is present state: “The deal calls for investing $110 billion for roads, bridges and major infrastructure projects, according to the summary,” an ABC article explained. “That’s about the same amount agreed to in a bipartisan bill in June but significantly less than the $159 billion that Biden initially requested in the American Jobs Plan.”

“Included is $40 billion for bridge repair, replacement and rehabilitation, according to the bill text,” the article added further. “The White House says it would be the single, largest dedicated bridge investment since the construction of the interstate highway system, which started in the 1950s.”