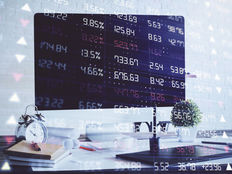 Bears won out during the month of January, which saw a dismal performance for most equities across the board as inflation fears and rising yields hit the major stock market indexes.

The sell-offs translated to strength for the Direxion Daily S&P 500 Bear 3X ETF (SPXS B+), which was up 16% in January. SPXS seeks daily investment results equal to 300% of the inverse of the daily performance of the S&P 500 Index.

Small-caps are especially susceptible to major market moves, so it was no surprise to see the Direxion Daily Small Cap Bear 3X Shares (TZA A-) up double SPXS with a 30% gain. TZA seeks daily investment results of 300% of the inverse (or opposite) of the daily performance of the Russell 2000® Index, which measures the performance of approximately 2,000 small-capitalization companies in the Russell 3000® Index.

Will it be a persistent win for the bears? What goes up must eventually come down, and while inflation fears racked equities, a comeback could be forthcoming.

“We continue to believe the economic conditions are favorable and the recent weakness is not a systematic problem, but rather a valuation reset due to the swift change with investors’ expectations for the future path of rates,” said MKM Partners chief market technician JC O’Hara. “A shock, not a top.”

Out With Growth, in With Cyclical

The strength in TZA certainly underscored the souring of investor sentiment when it came to growth-oriented names. The exodus translates to an influx of investors heading into cyclical names to avoid the market volatility.

“Between the amount of volumes that we saw and the massive swings that we saw in markets, the volatility really felt like it had a crescendo,” said Art Hogan, chief market strategist at National Securities.

“Crescendos usually happen when you’ve got a massive amount of capitulation and everything is for sale,” Hogan added. “For most of the month we would see money coming out of growth but going into cyclical. Then that would unwind and growth would catch a bit. That was all true until this past week. We’ve seen a bit of the aftermath of that storm, and that seems to be more stabilization.”