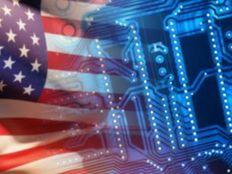 Final Vote on Semiconductor Bill Might Boost These ETFs

The U.S. semiconductor industry is looking to wean itself off dependence on China for chip technology, and it’s inching closer. Per an NPR report, a bill that would help boost competitiveness of U.S. semiconductors cleared a procedural vote in the Senate.

Next up, a final vote will push the Creating Helpful Incentives to Produce Semiconductors (CHIPS) bill through the Senate. The bill itself will allow for $54 billion in grants for semiconductor manufacturing and research, as well as additional government funding to support tech hubs and tax credits.

“We used to make 40% of the world’s chips, we make about 12% now,” said Secretary of Commerce Gina Raimondo during a virtual roundtable discussion with U.S. President Joe Biden. “The reality is, while we have invested nothing to spur domestic chip manufacturing, China has invested more than $150 billion to build their own domestic capacity. So we’re very much behind.”

It’s a bold move forward for the U.S. chip industry after the Congressional Research Service cited that four-fifths of global fabrication capacity was located in Asia (based on data from 2019). The Biden administration said that boosting the domestic chip industry will help ease supply chain disruptions, giving bullish semiconductor industry investors much to cheer about.

The overarching theme is to boost the broader technology sector. In a world where technology constitutes a certain degree of global economic power, innovation is a must.

“Chips alone are not going to be sufficient to preserve U.S. technology leadership, which is why we need the rest of the innovation bill so that we invest not just in the core technology powering innovation today, but also the technologies that will power innovation tomorrow,” said National Security Adviser Jake Sullivan.

2 ETFs to Play the Move

For a broader play on the tech sector, traders can look at the Direxion Daily Technology Bull 3X ETF (TECL A-). The fund seeks daily investment results, before fees and expenses, of 300% of the daily performance of the Technology Select Sector Index, which focuses on U.S. tech companies.