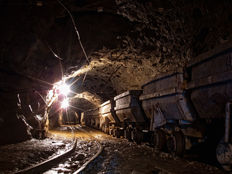 “Gold prices continued to rally as the dollar eased in the wake of the softer-than-expected retail sales report. Import prices along with export price rose more than expected,” an FX Empire report said. “Yields declined on Friday for a third straight trading session which weighed on the greenback and buoyed the yellow metal.”

The economic reopening and injection of stimulus dollars may have given analysts a predilection for stronger retail sales data. That, however, didn’t come to fruition, at least during the month of April.

Investors may be re-developing an appetite for gold again as a safe haven play.

Weaker purchasing power as a result of inflation could be feeding into bearishness for the dollar. Rather than make a play on gold to capitalize on greenback weakness, investors can also use miners to enjoy more price stability.

JNUG, which is up 4% the past month, gives 200% exposure to the daily performance of the MVIS Global Junior Gold Miners Index. The index includes companies from markets that are freely investable to foreign investors, including “emerging markets,” as that term is defined by the index provider.

NUGT is up 11% the past month, and seeks daily investment results equal to 200% of the daily performance of the NYSE Arca Gold Miners Index. The index is comprised of publicly traded companies that operate globally in both developed and emerging markets, and are involved primarily in the mining for gold, and, in mining for silver.