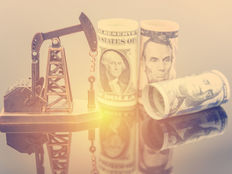 Have Oil Prices Reached Their Peak?

Despite a strong 2019 for stocks, one of the sectors that was hesitant to jump to record highs was the energy sector. One of its main drivers, oil, could be reaching a peak, according to Chevron CEO Michael Wirth.

It’s not a recent phenomenon, but something that has been brewing the last 10 years or so. The days of $100 oil prices could be a thought that’s far-fetched from reality.

“Oil markets have really changed over the last decade or so,” said. Wirth at the World Economic Forum in Davos, Switzerland. “We’ve moved from a period of time where there was a belief we were approaching peak oil, and now we’re in an era of abundance.”

Furthermore, a slowdown in oil production is being forecasted by the Energy Information Administration (EIA), and other organizations globally are supporting that notion.

“The EIA isn’t alone is expecting a slowdown in growth,” Sheela Tobben "wrote in a World Oil report":https://www.worldoil.com/news/2020/1/15/shale-discipline-could-slow-us-oil-output-growth-by-50-this-year. “The Paris-based International Energy Agency has issued similar forecasts. Slower production growth could undermine America’s recent transition to being a net energy exporter. In October, the nation sent more crude and refined products abroad than it imported, marking the second consecutive month it was a net petroleum exporter.”

Weakness in oil prices could drive gains for Direxion Daily S&P Oil & Gas Exploration & Production Br 3X ETF (DRIP ). DRIP seeks daily investment results that equal 300% of the inverse of the daily performance of the S&P Oil & Gas Exploration & Production Select Industry Index, which is designed to measure the performance of a sub-industry or group of sub-industries determined based on the Global Industry Classification Standards (GICS).

For contrarians, a fall could present a buy-the-dip opportunity. Traders can consider ETFs like the like the SPDR S&P Oil & Gas Exploration & Production ETF (XOP B+).