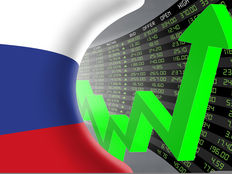 Is This Russia ETF Poised for Performance?

In today’s market uncertainty, it’s important to get diversification from other parts of the globe for gains, but which countries should traders focus on? One country they may want to give a closer look is Russia and specifically, the Direxion Daily Russia Bull 3X ETF (RUSL B-).

The index is intended to represent the overall performance of publicly traded companies that are domiciled and primarily listed on an exchange in Russia or that are not Russian companies, but nonetheless generate at least 50% of their revenues in Russia.

“Having trended sideways through the first half of the summer, the Direxion Daily Russia Bull 2X Shares (RUSL B-) has shown renewed momentum through July and August, gaining about 25% from July 13th," a Direxion Investments “The Xchange” article noted. “While individual stocks have contributed to the growth of RUSL in recent weeks (like internet firm Yandex, which has surged thanks to broad enthusiasm for tech stocks and its potential inclusion to the MSCI Russia Index), the broad performance of the ETF’s underlying MVIS Russia Index can be chalked up to rising natural gas and mineral prices that have benefitted the country’s vast array of energy and mining companies.”

Feeding into strength for Russia will be energy—namely in natural gas.

“On the energy front, Russia’s two largest natural gas firms are both experiencing a resurgence in their share price thanks to a steep rebound in LNG prices of almost 50% following a July lull,” the article added. “State-owned Gazprom and privately-owned Lukoil have generally moved in sympathy with the fluctuating natural gas market, which in mid-August broke well above the $2.20 level it had traded under since January.”

“A similar picture is playing out among the nation’s mining outfits as both precious and base metals find new yearly or — in the case of gold — all-time highs. While this has moderately helped boost shares of Norilsk Nickel, whose operations include nickel and palladium mines, Russia’s main precious metal miners, Polymetal International and Polyus, have garnered the lion’s share of the growth, far surpassing their previous all-time highs,” the article said further.