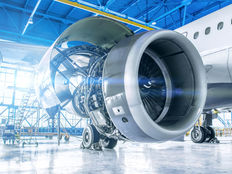 Lever Up with This Aerospace and Defense ETF

The re-opening economy is expected to see more air travel, which traders can leverage with assets like the Direxion Daily Aerospace & Defense 3X Shares ETF (DFEN).

Midway through 2021, the ETF is already up over 50%. As more of the world’s population gets vaccinated and Covid cases fall, air travel could surely pick up.

Whether it’s tourism or business, an improving economy could also mean consumers spend more on air travel. This bodes well for DFEN since about 17% of its assets are allocated towards Boeing.

“Air travel is picking up after a moribund, pandemic-affected 2020. More than 1.9 million people boarded planes in the U.S. on Monday, the highest level since March 2020,” a Barron’s article noted, citing that Cowen analyst Cai von Rumohr upgraded the Boeing stock to a “Buy” rating from a “Hold” rating while also raising his target for the stock’s price to $290 from $240 a share. “Over the holiday weekend, U.S. commercial air traffic was down less than 30% compared with 2019, a smaller drop than on recent weekends.”

The Barron’s article summed up a play on aerospace and defense succinctly, saying that “more people on planes is good news for all aerospace-related stocks.” Additionally, a changing airline industry that is focusing on reducing carbon emissions could help improve operations.

“Von Rumohr also sees a change coming in demand for commercial aircraft,” the article noted. “Governments and airlines are increasingly focused on reducing emissions of carbon dioxide, and new planes emit less of the greenhouse gas, so replacement demand could rise faster than investors expect. Lower operating costs, of course, are an additional reason to replace planes.”