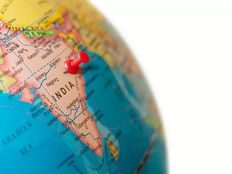 Developed markets appear to have absorbed the impact of the Russia-Ukraine crisis, but emerging markets (EM) may be more sensitive. That said, traders looking at India for potential growth opportunities may want to pay close attention.

From a geopolitical standpoint, it appears that India hasn’t taken one side over the other, preferring to swim in neutral waters. What this means for the country economically depends on how analysts slice and dice the scenario.

However, just because India wants to maintain neutrality, this doesn’t mean that it won’t be subject to the nuances of the crisis with respect to its economy. India represents the sixth-largest economy in the world and finds itself intertwined with other nations with a large stake in the crisis, such as China and the United States.

“Yet, this is unlikely to shield India from the ravages of a war of such scale,” Quartz says. “Especially since, in the global geopolitical context, both India and Russia today find themselves ever more closely linked to two others powers, China and the US.”

Furthermore, dependence on Russia for oil will also affect India’s economy. That said, no economy right now is immune to other headwinds like rising oil prices or rising inflation.

“Despite India’s limited direct exposure, the combination of supply disruptions and the ongoing terms of trade shock will likely weigh on growth, result in a sharper rise in inflation, and (lead to) a wider current account deficit,” said Sonal Varma, chief economist at Nomura Holdings, in a report.

A 2x Opportunity for Growth

Despite these challenges, India still presents an opportunity for growth. In the short term, traders can play bullishness with leveraged funds like the Direxion Daily MSCI India Bull 2x ETF (INDL C+).

INDL provides 2x daily long leverage to the Indus India Index, making it a powerful tool for investors with a bullish short-term outlook for Indian equities. Investors should note that INDL’s leverage resets on a daily basis, which results in compounding of returns when held for multiple periods.

The fund can be a powerful tool for sophisticated investors, but should be avoided by those with a low risk tolerance or a buy-and-hold strategy. The fund is up over 30% within the last 12 months.