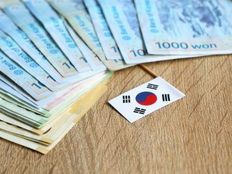 South Korea’s economy has been feeling the pangs of global inflation for most the year, culminating in a dismal third quarter performance. However, the Direxion Daily South Korea Bull 3X Shares (KORU C) has been showing signs of life, which could mean a comeback could be playing out.

In the meantime, the country’s economy has been falling victim to most emerging market countries. A strong dollar amid rising interest rates has been paired by a decrease in exports, according to a Reuters report.

“South Korea’s economy likely slowed to a near halt in the third quarter as weakening exports and rising interest rates knocked the wind out of what had been a resilient run, a Reuters poll of economists found,” the report said. “The export-led economy was expected to have expanded a seasonally-adjusted 0.1% last quarter, according to the median forecast of 21 economists, a sharp slowdown from the 0.7% quarterly growth in April-June.”

Despite this, there’s always potential for a comeback. If central banks around the globe, particularly the U.S., can get inflation under control and scale back on rate increases, countries like South Korea could gain steam, which bodes well for KORU.

KORU seeks daily investment results that equate to 300% of the daily performance of the MSCI Korea 25/50 Index. The index is designed to measure the performance of the large- and mid-cap segments of the South Korean equity market, covering approximately 85% of the free float-adjusted market capitalization of South Korean issuers.

Still, traders should tread lightly around KORU. A lack of economic growth could still persist, especially if the current trend prevails.

“GDP growth is likely to have been slower in 3Q22 compared with 2Q22, mainly due to the slowdown in consumption. The weakness in exports and manufacturing production is likely to have continued amid the deterioration in the global economic outlook,” noted Oh Suktae, economist at Societe Generale. “GDP growth should remain sluggish, at least in the near term, with consumption growth normalising from the post-pandemic recovery and the export and investment environments likely to remain weak.”

As such, the prospects of a full-scale comeback may be muddy given the headwinds that South Korea’s economy faces.