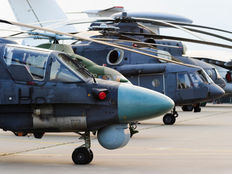 This Defense ETF Rose 20% in the Last 5 Days

Russia’s invasion of Ukraine is re-focusing the world on the importance of aerospace and defense. As such, the Direxion Daily Aerospace & Defense 3X Shares ETF (DFEN A-) has risen 20% over the last five days.

Meanwhile, the world remains fixated on the escalating situation in Ukraine, which could get even more volatile at any point. Over 1,700 km away is Germany, which is already bolstering its defense spending.

According to a Reuters report, defense spending in Germany “will be increased to 2% of gross domestic product, from an estimated 1.53% in 2021, according to NATO statistics.” It’s a departure from Germany’s standard of refraining from increasing its defense spending despite global pressure to do so.

As for the fund, DFEN seeks daily investment results equal to 300% of the daily performance of the Dow Jones U.S. Select Aerospace & Defense Index, which attempts to measure the performance of the aerospace and defense industry of the U.S. equity market.

The fund was down 12% by the end of January, but Russia’s invasion quickly propped up the fund, giving bullish traders reason to cheer. DFEN is now up 25% for the year.

In recent years, environmental, social, and governance (ESG) investing has come to the forefront, pushing back advancements in defense and defense-related stocks. However, the recent developments in Ukraine are forcing some investors to give defense higher priority again.

“More resources for defence among U.S. allies in Europe combined with the challenge from Russia could contribute to the development of a larger, more capable.. European defence industrial base that could.. become more competitive with that of U.S.,” said Seth Seifman, analyst at JPMorgan. “However, and in the near-term we see Germany’s announcement as an opportunity for U.S. defence contractors.”