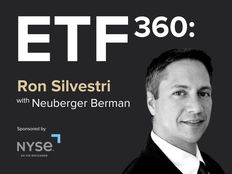 As the world works to cut emissions, investors have the opportunity to capitalize on the companies that will play a role in a greener future. Silvestri said, “The overall transition to a lower carbon environment is a compelling multi-decade mega-theme for investors,” noting that a confluence of drivers including demand, emerging technology, and favorable government policy are all uniting in a way that could boost NBCT’s short- and long-term prospects.

“In our portfolio, we retain a selective emphasis on those advantaged companies that really help facilitate lower greenhouse gas emissions and whose business models really benefit from carbon transition,” Silvestri said. He added, “Investing in a more climate-resilient future is the most powerful mega-trend I’ve ever witnessed in my 30-year career on Wall Street.”

Given that an estimated $50 trillion dollars of investment will be needed by 2050 to meet emission goals, Silvestri sees the enormous long-term opportunities in carbon transition. Of course, governments need to back a low-carbon future. Asked about the importance of government policy, Silvestri said, “Policy, to your question, is a significant tailwind. For perspective, over 100 countries — or half of global GDP — have made carbon commitments.”

Silvestri views the Inflation Reduction Act as the most significant piece of climate legislation ever, noting that, “greener energy is a prominent theme in the bill, which could turbo-charge renewable energy growth going forward.” With incentives for EVs and green power in the bill, Silvestri sees powerful growth opportunities. “It is actually estimated that the world needs $14 trillion in grid spending to support carbon transition goals out to 2050.”

NBCT has many transition and distribution holdings that stand to benefit from the electrification trend, such as Quanta. Silvestri touted the active management chops of Neuberger Berman, which combines both investment talent and policy expertise.