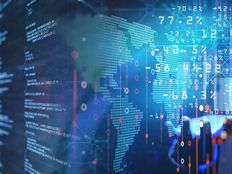 Some Big Tech Stocks Could Benefit From Rising Rates

Owing to the long-term cash flows of technology companies, it’s conventional wisdom that stocks from this sector are vulnerable to rising interest rates.

Obviously, that’s a point to ponder because the Federal Reserve boosted borrowing costs by 25 basis points last week, and some experts say that another six or seven rates could be delivered this year. It’s also believed that the Fed’s newest tightening cycle could extend well into next year or even into 2024.

In theory, that sounds like bad news for exchange traded funds such as the Invesco QQQ Trust (QQQ B+) and the Invesco NASDAQ 100 ETF (QQQM B), both of which track the Nasdaq-100 Index (NDX). The reason that QQQ and QQQM could potentially prove more durable than expected as rates rise is simple: Some of the funds’ marquee holdings are among the most cash-rich companies in corporate America, and as rates rise, so does interest on cash instruments.

While absolute interest rates will remain low, even modest rate hikes by the Fed could mean billions more in interest earned by companies holding hundreds of billions in cash.

“Big companies that should gain are cash-rich Apple (AAPL) and Alphabet (GOOGL). Apple had $203 billion of cash and equivalents at year-end 2021, and Alphabet was sitting on $139 billion reports Andrew Bary for Barron’s.

To be clear, Google parent Alphabet is classified as a communication services stock. Technology stocks account for 50.29% of QQQ and QQQM, while the communication services sector represents 17.51% of the ETFs’ rosters. The impact that higher interest rates can have on the cash hoards of Apple and Alphabet is staggering and good news for investors.

“Apple could be earning $4 billion more on its cash by 2023 and Alphabet nearly $3 billion. Higher interest income could boost Apple’s net income by about 3% next year, and Alphabet’s earnings may get a 4% lift,” according to Barron’s.

Of course, that’s relevant to investors mulling either QQQ or QQQM because the Invesco ETFs allocated 12.12% to Apple, making the iPhone maker the largest holding in both funds. The pair of funds also allocated 7.63% combined to the two Alphabet share classes.