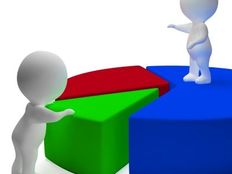 What Are the Most Undervalued Sector ETFs?

The U.S. equity market is trading at a lofty 21.56x earnings, which is nearly 40% higher than its historical mean of 15.56×. While record-low interest rates may justify a higher valuation, the Federal Reserve has hinted that an interest rate hike could come as early as next month. This has led to concerns that valuations may be due for a correction over the near-term, especially with positive economic data pointing to a near-term rate hike.

In this article, we’ll take a look at the key drivers behind some of these sector valuations, and whether or not investors should dive deeper.

Falling energy prices negatively impacted the Vanguard Energy ETF (VDE A), which trades with a price-earnings ratio of 19.9×. While refineries have been a bright spot in the sector, the majority of companies in the space won’t see a turnaround until energy prices stabilize and begin to rise. OPEC’s willingness to keep pumping crude oil to starve out shale producers makes a rise in prices unlikely until the market shakes out.

In the same vein, falling commodity prices and slower demand from emerging markets such as China led the iShares Dow Jones U.S. Basic Materials ETF (IYM A-) to fall 14% year-to-date and trade at just 17.9x earnings. The good news is that basic materials aren’t susceptible to quite the same dynamics as OPEC’s control over energy prices, which means a rebound in global commodity demand could help boost the sector.

The Federal Reserve’s threat to hike interest rates in December has put pressure on the utilities sector, with the iShares Dow Jones U.S. Utilities ETF (IDU B+) falling about 10% so far this year and trading at just 17.74x earnings. Higher interest rates are thought to reduce demand for yield that has kept investor interest in utilities at a high. For example, investors may choose to pick up higher-yielding Treasuries rather than IDU’s robust 3.25% yield.

On the other hand, the financial services sector could benefit from higher interest rates, since it equates to an expanding interest margin that enhances profitability. Insurance companies also benefit from the ability to earn higher returns on premium income they collect from policyholders. The Vanguard Financials ETF (VFH A+) is trading roughly even for the year, and has a modest P/E ratio of around 17.2x, making it a potentially attractive bet.

The technology and consumer discretionary sectors tend to benefit from rising interest rate environments, but they are hardly screaming buys from a valuation perspective.

The First Trust Dow Jones Internet ETF (FDN B+) trades with a 25.77x multiple after rising more than 20% year-to-date, although talk of a tech bubble remains prevalent. Meanwhile, the iShares U.S. Consumer Services ETF (IYC A-) is trading 5% higher year-to-date with a 20.73x multiple. These multiples are near the S&P 500’s 21.56x multiple or slightly higher, but they are especially lofty when compared to the benchmark index’s historical 15.56x mean multiple.

The most undervalued sectors of the economy tend to be that way for a reason, whether it be depressed energy prices or the threat of higher interest rates. With a high level of uncertainty right now, investors may be best off holding a diversified basket of ETFs or adjusting allocations to favor undervalued sectors such as financial services or even consumer discretionary.