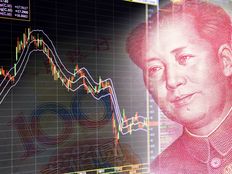 China’s economy slowdown has already taken a toll on the global economy, but the market is still guessing just how severe the slowdown will become in the coming years.

Over the past six months, the iShares China Large-Cap ETF (FXI A), a leading Chinese exchange-traded fund with $5.8 billion in assets, is trading down nearly 25%. The S&P 500 SPDR (SPY A), by comparison, is trading down just about 2% over the same period.

The first question in assessing whether or not Chinese ETFs are oversold is to look at where the country’s economy is headed over the coming quarters.

China’s economy has started to decelerate over the past few years, but the annualized growth fell to a six-year low during the third quarter of this year. At the same time, the country’s total debt hit 280% of its GDP, which could limit future growth.

On the bright side, the country’s domestic service sector appears likely to continue growing at a low double digit pace and generate real GDP growth of 4%-5%. The service sector has also become a growing part of the total economy, accounting for a greater percentage of GDP than industry in 2012. While consumers have traditionally saved a high percentage of their income, there’s evidence that these trends are quickly changing.

China’s transition from an industrial to a consumer-driven economy will likely reduce its growth rate over the coming quarters, but the decline may not be as steep as some media pundits have predicted. Consumer spending could help keep growth rates at around 5% over the long-term, while putting the economy on a much more solid footing.

The second question in assessing whether or not Chinese ETFs are oversold is to look at the valuation of Chinese equities relative to the rest of the world.

By comparison, the S&P 500 SPDR (SPY A) trades at 17.37x earnings, the iShares MSCI Emerging Markets ETF (EEM A-) trades with a 19.59x price-earnings ratio, and the iShares MSCI EAFE ETF (EFA A) trades at 16.80x earnings. These multiples are significantly higher than China’s equity ETFs, despite the slower absolute growth rates in many emerging markets, and especially developed markets like the U.S. and Europe.

Some analysts argue that Chinese equities deserve a modest discount despite their growth rates, due to the heightened monetary policy and geopolitical risks. For instance, China’s unexpected depreciation of the yuan sent the market reeling, while its direct interventions in the equity markets elevated volatility. However, there are many catalysts, like the deregulation of key government-controlled industries, which could reduce risk moving forward.

Chinese equities currently trade at a significant discount compared to developed markets, judging by their price-earnings ratios, but it’s difficult to say whether they are an attractive buy. On the one hand, pessimism surrounding the Chinese economy is likely overblown in some cases. But on the other hand, the government has been unpredictable in its interventions and real reforms still appear to be quite distant – reforms needed to regain investor confidence.

US LNG Expects a Mixed Bag Despite Strong Backdrop