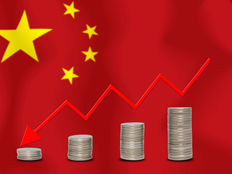 Where Is China’s Economy Heading in 2016?

China’s economy has struggled over the past year in terms of growth, with GDP growth falling below 7%, and the Shanghai Composite Index heading back toward a breakeven point. On the other hand, the economy slowly has been transitioning from an emerging to a developed market in many ways, with consumer spending becoming a key economic driver, and the renminbi heading toward reserve currency status.

In this article, we’ll take a look at some of these trends and where the largest economy in the world may be heading moving into 2016.

China’s annual growth rate has fallen from 8% in January 2013 to just 6.9% during the third quarter of 2015. According to many experts, the real growth rate may be quite a bit lower than these figures, since the government has been known to “smooth” its economic data. The real decline can be seen more easily in the country’s industrial production figures, which fell from around 20% in 2010 to just above 5% in recent quarters.

Investors have felt the pain from the slowing growth, with the Shanghai Composite Index falling more than 30% over the past six months. For U.S. investors, the iShares China Large-Cap ETF (FXI A-) fell about 26% over the past six months, with outflows of $262 million. These trends have been consistent with the emerging markets sell-off across many different members of the asset class aside from just Chinese equities.

China’s slowdown may be detrimental to investors in the near term, but the correction could be a positive thing over the long term as a sign the economy is maturing.

The country’s consumer spending has been steadily increasing since the 1950s, with retail sales jumping 11% during the latest quarter. With household debt remaining at around 37% and personal incomes rising at double-digit paces, there’s ample room for ongoing growth in consumer spending to drive the domestic economy. The service sector even surpassed the manufacturing sector as a percentage of GDP in 2012.

In December, the International Monetary Fund also awarded the renminbi reserve currency status alongside the dollar, euro, pound sterling and yen. The move represents a significant milestone for the country, as its currency is the fourth-largest used in world trade – but it remains to be seen how much the world’s financial markets will embrace it. At its core, this will mean permitting the market to set the value of the currency by freely floating it.

Refer to Chinese Yuan Recognized as a Reserve Currency for more information.

China’s economy struggled throughout the year in terms of growth, but the country simply may be transitioning to a developed economy. While many risks remain for investors, the growth in consumer spending and the acceptance of the renminbi as a global currency point to a positive direction over the long term. Investors can access the market through a variety of different ETFs focused in the space targeting various sectors.

Diversify Away Risk in Corporate Bonds With This ETF