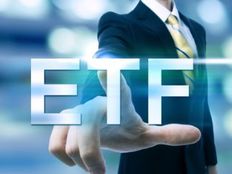 The Latest ETFs and ETNs Focus on Oil and Emerging Markets

This week we saw three new ETNs introduced on February 8; two from UBS and one from Credit Suisse. ProShares also released an ETF in late January. The latter ETF invests in emerging markets, while the ETNs are split between oil and two forms of Master Limited Partnerships (MLPs). Let’s take a look at what each one delivers to investors.

This brand-new ETF singles out emerging-market companies with the longest track records of year-over-year dividend growth. The fund holds assets in an equal-weighted format so performance isn’t dependent on just a few holdings. EMDV holds a minimum of 40 stocks with no more than 30% of its weight in any one sector and no more than 50% in any one country.

The fund’s international exposure is varied, with China, India, and South Africa taking up more than 53% of the fund’s total geographic holdings. Sectors with the most weight include financials, information technology, and consumer staples. The expense ratio of the emerging-market fund is competitive at 0.60%, and the fund has done fairly well over the past week, climbing around 3% since inception on January 25, 2016.

The ETN’s annual fee is very competitive at 0.55%, making it one of the cheapest options for investors seeking an ETF or ETN that tracks oil futures. As a short-term trading instrument, this ETN carries with it the risk inherent in such trading since it constantly buys and sells contracts instead of investing directly in physical oil.

The new UBS ETN seeks a 2x leveraged return of the Alerian MLP Infrastructure Index. The expense ratio for the note is 0.85%. Further, the ETN uses considerable leverage in order to maximize returns, classifying it as high risk. The index it follows comprises 22 energy infrastructure MLPs whose primary business is the transportation and storage of energy commodities. The top two holdings, Enterprise Products Partners LP and Magellan Midstream Partners LP, make up around 20% of the note’s total weight.

This new UBS ETN is linked to the 2x leveraged performance of the S&P MLP Index. Its expense ratio is 0.95% accrued daily. The S&P MLP Index includes both MLPs as well as publicly traded limited liability companies (LLCs). Its largest two individual holdings, Enterprise Products Partners LP and Energy Transfer Equity LP, make up about 25% of the fund’s total weight. Like its counterpart MLPQ, MLPZ started trading on February 8, 2016.