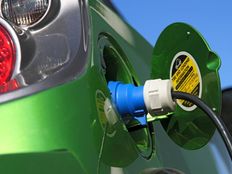 Electric vehicles may have been commercially available since the 1800s, but Henry Ford’s mass-produced Model T pushed them to the backburner. But with batteries becoming cheaper and more advanced, electric vehicles have experienced a renaissance since the early 2010s.

Nissan Motor Co.’s (NSANY) LEAF is by far the most popular electric vehicle in the United States with a cost of less than $25,000 after incentives, followed by General Motors Co.’s (GM) Chevrolet Volt and Toyota Motor Co.’s (TM) Prius. Lately, Tesla Motors’ (TSLA) Model S has taken the world by storm with its luxury sedan. The company’s plans to introduce a more affordable car has inspired hope for an all-electric future.

According to ZSW, there were approximately 1.3 million electric vehicles on the roads around the world in 2015, which is up more than 70% from year-ago figures. The research firm believes that electric vehicles could become price-competitive with traditional internal combustion automobiles by 2022 and account for roughly 35% of global new car sales by 2040.

The rapid growth of the electric vehicle industry has drawn the interest of investors looking to capitalize on the growing market.

Purchasing individual stocks is one option to capitalize on the growth, but these stocks must be incorporated into a larger portfolio in order to diversify risk. A better bet may be purchasing exchange-traded funds (ETFs) with exposure to the electric vehicle industry. Many of these ETFs have broad exposure to many different companies operating within the industry, which limits the risk of a single company’s stock performance bringing down an entire portfolio.

ETFdb’s Stock Exposure Tool enables investors to find ETFs that have exposure to specific stocks and thereby specific industries – such as electric vehicles. As one of the premier pure-play companies in the space, Tesla Motors accounts for a large percentage of many diversified ETFs focused on the electric vehicle industry, which makes it worth analyzing.

The following table shows some ETFs with this exposure, as well as their expense ratios and the weighting of Tesla Motor’s stock within the funds:

The Market Vectors Global Alternative Energy ETF (GEX C+) is the most prominent fund falling into the category. In addition to Tesla Motors, the fund holds large stakes in alternative energy companies like Vestas Wind Systems (OTC: VWDRY) and various solar companies. The Global X Lithium ETF (NYSE ARCA: LIT) is another interesting ETF that covers the battery side of the industry with other holdings such as FMC Corp. (FMC).

There are many important considerations for investors looking to build exposure to electric vehicles into their portfolio – including several unique risk factors.

The most significant risk factor is the increased volatility associated with electric vehicle companies like Tesla Motors. With a beta coefficient of 1.21, the stock is about 20% more volatile than the S&P 500. This isn’t necessarily a bad thing – volatility can be skewed to the upside – but it means that there’s less predictability. Older investors or those looking to withdraw money from the market in the near term may want to consider less risky sectors.

A second consideration is the lack of pure plays within the space. When it comes to ETFs, many funds that hold stocks like Tesla Motors also hold wind and solar companies that may not relate directly to the electric vehicle industry. Similarly, companies like Nissan and General Motors are primarily driven by automobiles rather than electric vehicles, which means that holding their stock may not generate the same returns.

Finally, investors using ETFs to build exposure to the sector should watch expense ratios since they have a big long-term impact on returns. While ETFs targeting specific sectors tend to charge more, there’s also a wide variety in the percentages being charged. The example above highlights the vast differences, with expense ratios ranging from 0.1% to 0.95% – a 100% difference that can add up to tens of thousands of dollars over many years.

Electric cars have been rapidly growing in popularity as the economics behind the technology improves. By 2040, ZSW estimates that roughly 35% of global new car sales will come from electric vehicles, which makes it an important market for investors to watch.

ETFs provide a great way to build diversified exposure to electric vehicles into portfolios, while individual stocks offer more targeted exposure to the sector. Either way, there are many things that investors should watch out for, including expense ratios and volatility.