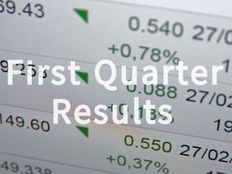 What to Expect From Q1 Earnings

Alcoa Inc. (AA) kicked off earnings season with better-than-expected earnings, but lackluster revenue and a grim outlook sent shares about 5% lower on Tuesday morning. Analysts are expecting similar performance from the rest of the market, which continues to struggle with low oil prices and a strong dollar. According to FactSet, S&P 500 profits are expected to fall 9.1% year over year, despite earlier projections calling for 0.7% growth.

The S&P 500 has been surprisingly resilient despite these grim predictions. After a 10% rally beginning in mid-February, the SPDR S&P 500 ETF (SPY A) continues to trade in the black for the year. The benchmark index’s price-earnings ratio stands at 19x with a forward P/E of about 17x, according to State Street Global Advisors, which places it above the historic mean of about 15.5x and at its highest levels since the 2008 financial crisis (see Figure 1).

Investors can expect to see the majority of earnings growth come from health care and biotechnology sectors thanks to new drugs and mergers. After being beaten down since the middle of last year, the sectors posted a strong recovery in recent months. Biotech earnings are expected to grow 12% this quarter, while mergers and acquisitions – particularly by Pfizer Inc. (PFE) – could drive valuations higher in the near term.

Of course, the expectations for higher growth may already be priced into equities, which might make them less appealing. The iShares NASDAQ Biotechnology ETF (IBB A-) trades with a P/E ratio of 22.43, which makes it among the most expensive ETFs in the space. Traders will weigh the sector’s earnings with this valuation and technical factors surrounding its recent decline in determining where it’s headed moving forward.

The energy sector is likely to see the biggest decline in earnings as it may report a small loss for the first time in recent memory. The energy sector also has the highest forward P/E ratio in the market at 62.7x, which suggests that many investors are betting on a turnaround in crude oil prices. These prices are heavily dependent on OPEC’s decision-making at its upcoming meetings and adherence to plans to freeze or cut crude oil production, resolving the global supply glut.

From a valuation standpoint, the financial sector may present the best opportunity for investors in today’s market. The sector has a forward P/E of 12.4x, which is the lowest in the market following a dramatic fall in prices. Expectations for this earnings season are very low after 70 of 90 companies reported downward revisions to their EPS estimates for the first quarter, which could set the stage for earnings surprises. Of course, the future depends on interest rates.

Earnings growth isn’t expected to resume until the second half of the year, although a lot of that depends on the price of oil and the dollar’s strength. While analysts are predicting a 2.1% increase in earnings and a 1.6% increase in revenue for the full year, the International Monetary Fund cut its global forecast to 3.2% growth and warned of stagflation risks. As such, the S&P 500’s true performance may depend a lot more on factors that nobody controls.

Investors may want to focus on finding value opportunities in higher growth sectors such as health care and biotech, or seek out potential earnings surprises in underappreciated sectors like financials. But in aggregate terms, this earnings season is likely to be disappointing and could halt the S&P 500’s robust rally.