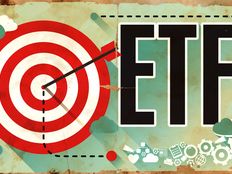 With exchange traded funds (ETFs) continuing to rack up the lion’s share of investors’ money, the sponsors of more traditional investment vehicles have taken notice ‒ especially those who have spent decades building up huge offerings of mutual funds. We’ve already seen mutual fund powerhouses like Fidelity, Oppenhiemer, Legg Mason, and John Handcock take the ETF plunge in order to turn back the tide of potential redemptions. Now we can add another powerhouse to that list.

Mutual fund giant Franklin Templeton was the latest to try their hand at ETFs.

Like its rivals, Franklin Templeton chose to differentiate itself from the pack by offering a suite of smart-beta ETFs. Its four new launches play directly into its specialty of being a manager of global and international portfolios.

Ultimately, the offerings continue to show how powerful the ETF movement has been and provide more tools to help build portfolios.

Technically, this isn’t Franklin’s first foray into ETFs: the mutual fund group launched the Franklin Short Duration US Government ETF (FTSD ) back in 2013. However, the actively managed cash solution hasn’t exactly lit the industry on fire. After laying dormant for several years, Franklin Templeton is finally back to the ETF well as of June 1 by offering a suite of global funds dubbed as “LibertyShares.”

Like most smart-beta funds, the new LibertyShares lineup will feature fundamental indexing to try and improve on the returns of a broader parent index. In this case, the four LibertyShare funds will focus on measures of quality, value, and momentum, as well as low volatility standards. That should sound familiar for many ETF watchers, since those are the basic metrics that most fundamental indexes are built from.

However, what makes Franklin’s offerings stand out is just how they are weighted. LibertyShares will use a unique approach of using custom factor weightings in order to achieve outperformance, because the issuer believes that all factors are not created equal. Some produce better outcomes than others. The suite of funds will weigh a stocks quality at 50%, value at 30%, momentum at 10%, and low volatility at 10%.

That’s a sharp contrast to most smart-beta funds, who tend to equally weigh the four factors. At the end of the day, it could help Franklin Templeton’s LibertyShares provide even more return than similar smart-beta funds.

As we stated above, Franklin’s new funds focus on its abilities as a globally-focused manager of assets. As such, they run the gamut of developed and international investing themes.

The Franklin LibertyQ Global Equity ETF (FLQG A) offers an all-in-one approach to smart-beta investing. FLQG’s investment universe is the MSCI ACWI. That includes all the nations of the world ‒ the United States, developed markets, and emerging nations. You name it, it’s in here. FLQG will screen the broad parent index for the previous fundamentals in order to come up with its portfolio of both domestic and international stocks. Similarly, the Franklin LibertyQ Emerging Markets ETF (FLQE B+) will focus solely on emerging markets and stocks included in the MSCI Emerging Markets Index.

The Franklin LibertyQ International Equity Hedged ETF (FLQH B+) will focus its smart-beta and fundamental screens on developed market stocks. This includes equities domiciled in Europe, Japan, and Australia. The twist on FLQH is that it’s 100% hedged to the US dollar. By hedging its currency, the fund hopes to remove the undesirable effects of currency fluctuations on returns.

Finally, the Franklin LibertyQ Global Dividend ETF (FLQD B+) adds its own twist: FLQD will follow the same basic screening pattern as the rest of the LibertyShares. However, the ETF then adds screens for dividend yield, and long-term dividend sustainability and growth, as well as underlying balance sheet strength. That creates a portfolio of high quality global dividend payers.

With ETFs continuing to dominate traditional mutual funds, it’s only inventible that many of the major mutual fund issuers would start offering ETFs. Franklin Templeton was just the latest. However, Franklin’s new LibertyShares have the potential to catch on due to their unique weighting processes.