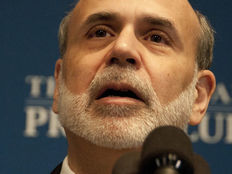 The "Bernanke Put" Lives On

Central bank policies around the globe are as accommodative as ever, bringing back to light the so-called “Bernanke Put”, which many had ruled out after the first rate hike in late 2015 since the depths of the 2008 financial crisis.

Originally coined in the late 90s to describe the loose monetary policy enacted by former Fed chairman Alan Greenspan, aka the “Greenspan Put”, the term refers to the notion that policymakers will do whatever it takes to prop up the market – be it print more money, keep rates low, or devise some other form of stimulus.

Fast forward to today, and it’s no secret that “buying the dip” has proved to be a profitable strategy. Look no further than how the recent Brexit-induced sell-off has played out.

After the shocking results of the UK referendum vote on June 23, 2016, financial markets around the globe swiftly sunk lower. The recovery was just as unexpected however, with investors enduring stiff selling pressures for a mere two days. Major equity benchmarks bottomed out by June 27, and haven’t looked back since.

Why? Because of expectations that policymakers would, yet again, ride to the rescue in an effort to remedy the situation. And they did.

Stimulus Around the Globe

This time, it wasn’t just the Fed, or the “Yellen Put”, that inspired confidence.

The support didn’t stop there, however.

Let’s review how major benchmarks have held up since the Brexit shock. Consider the following returns comparison between U.S. (SPY A), U.K. (EWU A-), Japanese (EWJ A) and Emerging Markets (EEM A-) equities spanning from June 27 to August 9, 2016:

While U.S. equities haven’t matched the gains seen in the U.K. or developing markets, the S&P 500 has managed to set all-time highs since the recent bottom. The reminder that central banks will do whatever it takes has fostered a fierce rebound clearly favoring risk-on assets, namely Emerging Markets equities.

Looking ahead, risky assets appear poised to thrive in an environment dominated by stimulus expectations and accommodative monetary policies around the globe. Barring any major surprises on the policy and economic data front, the bulls are in control here.

One piece of evidence that confirms this is the fact that equity markets across the board responded very positively following the latest better-than-expected employment data out of the U.S. on August 5. In a less bullish environment, investors would have been quick to take profits at the first sign of rate hike expectations resurfacing.

Ex-U.S. ways to play include:

The post-Brexit rebound was driven by expectations that central bankers would ride to the rescue, and thus far, this mentality has rewarded momentum investors quite well. The only problem is this sort of environment – one dictated by stimulus expectations – can (and will) disappoint the market sooner or later.

For traders, this may provide another opportunity to “buy the dip”, although the currently low-volatility levels could lead to a deeper-than-expected pullback, and shake out the weaker hands before the uptrend resumes. Investors are advised not to alter their objectives based on anticipating the next stimulus announcement, or lack thereof.