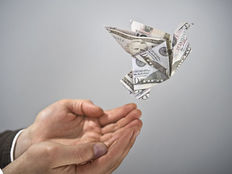 This week’s trending ETFs are centered on global markets and currencies.

After passing the Fed’s annual stress tests, the entire financial sector soared as banks began to issue dividend increases and stock buybacks. With a drought in mid-America and Canada, wheat demand has increased rapidly. Telecom Argentina and Cablevision announced they will be merging amid the new policy changes in Argentina. After the ECB’s Draghi made an announcement, the euro hit new highs against the U.S. dollar and sterling. Finally, with the market seeing little trading in recent weeks, inverse volatility has seen interest.

This week’s largest increase in interest was focused on the financial sector this week, which was up 222% this week. All 34 banks passed the stress tests that the Federal Reserve conducts on an annual basis. In doing so, every bank was deemed fit enough to survive a financial crisis and the Fed approved many of the bank’s intended dividend increases or stock buybacks. This is the first time since 2008 that all 34 banks have successfully passed the stress tests. The only bank to not pass with flying colors was Capital One (COF), which has until the end of the year to submit a stronger plan. However, this did not prevent the Fed from allowing Capital One to raise its dividend for its shareholders. JPMorgan Chase (JPM) announced a $0.06 dividend hike and $19.4 billion in stock buybacks. Bank of America (BAC) boosted its dividend $0.12 a share, with another $12 billion in share repurchases.

The largest financials-based ETF is the Financial Select Sector SPDR Fund (XLF A) and currently has over $25 billion in assets under management. After the news broke of the stress tests, the sector has been up 4.20% for the week. Financials have also been outstanding over the last year, up over 37%, due to Donald Trump winning the election and the Fed continuing to raise interest rates. Investors looking for other financials ETFs, click here.

In the second increase of interest of 177%, wheat futures saw a jump to a one-year high this week. The U.S. Department of Agriculture lowered its acreage estimate for U.S. wheat plantings, which came in at 45.7 million acres. This lower estimate, which is actually the lowest since 1919, has been primarily driven by the drought conditions in the Dakotas, Montana and Canada. The drought, along with managed money short-covering in wheat, is helping to propel the market higher.

The largest ETF that closely mirrors wheat futures is the Teucrium Wheat Fund (WEAT C) and has $73 million in total assets under management. The fund is up a whopping 16.55% for the week and up 19.77% on a year-to-date basis. However, WEAT has only recently become a positive yielding investment, being up just 3.26% on a trailing one-year basis.

The telecom sector had its interest grow by 135% this week due to the recent news of the merging of Telecom Argentina and Cablevision. This merger has become a result of recent President Mauricio Macri’s telecom sector reforms. The merger needs to be approved by regulators and shareholders and would enable the combined company to offer fixed line, cell services, pay television and broadband internet access.

On the news of the merger, Telecom Argentina SA (NYSE:TEO) is up over 18% for the week. However, this did not help any of the telecom sector ETFs, most of which do not hold TEO in its portfolio. The largest global ETF in the telecom sector is iShares Global Telecom ETF (IXP A-) and currently has 41 holdings of global telecom companies. Unfortunately, Telecom Argentina is not one of them and Cablevision is a privately-owned company. Over the last week, IXP has seen little movement and is slightly down 0.31%. It has also not performed that well on a year-to-date and trailing one-year basis, up 1.66% and down 3.81%, respectively. This underperformance is mostly due to its two top holdings within the ETF, which are AT&T Inc. and Verizon Communications (VZ). AT&T is down over 10% and Verizon is down over 16% on a year-to-date basis, putting a drag on the entire sector.

To view all the ETFs in the telecom sector, click here.

The Euro was this week’s fourth-most trending topic, showing an increase of 92%. This was caused by the currency market making some major shifts this week after a variety of actions. The euro saw new one-year highs against the U.S. Dollar, as well as a seven-month high against the sterling. This all took place after the European Central Bank President Draghi addressed speculation about the ECB’s plan to reduce its asset-purchase program. He stated that the reduction would be gradual because the European economy currently still needs monetary support.

Investors looking to gain exposure to the Euro can do so through the Guggenheim CurrencyShares Euro Trust ETF (FXE A). This fund is designed to provide exposure to the euro currency and might be less complex than purchasing the currency outright. The fund is one of the better performers in the space on a year-to-date figure, up 7.42%. It has also performed well for the week, up 1.57%.

With the markets coming out of the gate hot in 2017 and with the Dow Jones Industrial Average up 6.85% from January 1 to March 1, the market has recently cooled off. Since March 1, 2017, the DJIA is up only 2.58% by end of June. At the same time, the day-to-day volatility as represented by CBOE’s VIX has seen recent lows. When markets see rampant buying or selling, the VIX spikes. During the same time period, from March 1 to June 30, the VIX has seen a decline of over 17% and is well off from the highs it touched earlier this year.

One winner during this time is the inverse volatility sector, which has seen an increase of 77% in viewership this week. The inverse volatility indicator measures the exact opposite of the VIX and gains in value in times where there is little market activity. The ProShares Short VIX Short-Term Futures ETF (SVXY A-) is an ETF that measures this and it has seen recent success, as it is up over 74% on a year-to-date basis. Over the last week, it is down 5.33%, mostly due to the active trading done in the markets on June 29. However, for the trailing one-year, the fund is up by a staggering 214%.

Sell on the Pop Prospects: May 18 Edition

Tokenomics for the Smart Investor (Part I)

The Advisor’s Guide to Variable Dividends in Midstream