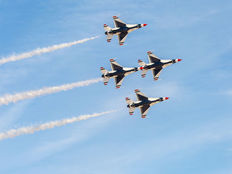 Trending: Aerospace Sees Gains Thanks to Boeing and Lockheed Martin

This week’s trending ETFs are centered on aerospace, defense and transportation.

The week’s top trending topic is aerospace defense, thanks to Boeing and Lockheed Martin showing excellent earnings potential. After North Korea fired off a test ICBM which failed to have a viable re-entry system, South Korea became the second-most popular trend this week. Natural gas saw a spike in price after the EIA announced a positive outlook on the sector. The transportation sector gained interest thanks to the recent success of the airline industry. Finally, the high-flying stock price for Tesla took a tumble after the company missed expectations, leading to a substantial interest in the automotive sector.

Aerospace See Gains, Thanks to Boeing and Lockheed Martin

This week, aerospace defense had the largest increase in viewership, up 89%. This interest is mostly attributed to big movements in two of the largest companies in the sector, Boeing Co. (BA) and Lockheed Martin Corporation (LMT). Boeing announced on Friday that it delivered 183 commercial planes during the second quarter of the year, bringing the year’s total to 352 and beating its main competitor, Airbus. Boeing was also selected for a $294 million deal with Algeria’s Tassili Airlines to build three new 737-800 aircrafts. Lockheed Martin just won the contract worth $5.6 billion to support the production of the F-35 Joint Strike Fighter for the U.S. Armed Forces. Upon this news release, both BA and LMT were up 4.6% and 3.4%, respectively, in the last week.

To gain exposure to the sector overall, the iShares U.S. Aerospace & Defense ETF (ITA B+) has the most assets under management, with over $3.2 billion. For the week, ITA is up almost 3% mostly thanks to the performance of BA and LMT, which are the first- and third-largest holdings in the fund. ITA has also performed well on a year-to-date basis, up 15.53%. Investors looking for other aerospace and defense ETFs, can click here.

The second-most trending topic this week is South Korea, up by 84% this week. On July 4, while the United States was celebrating its Independence Day, North Korea test-launched an intercontinental ballistic missile that flew 578 miles before landing in the sea between North Korea and Japan. This caused an immediate reaction from both the United States and South Korea, who worked together on joint military forces. The recently elected South Korean President, Moon Jae-in, announced that he was in favor of dialogue with North Korea, despite the “nuclear provocation” of a test-launch. However, on July 11, the South Korean intelligence service told lawmakers that North Korea’s missile system is not capable of re-entry, which is a crucial part of the success of the weapon.

However, the threat of North Korea’s nuclear capabilities did not negatively affect the South Korean markets. One of the largest funds that is focused on South Korea is the iShares MSCI South Korea Capped ETF (EWY B). Over the last week, EWY has been relatively flat, up only around 1%. However it has performed well on a year-to-date basis and is up close to 30%. This is mostly attributed to the fund’s largest holding, Samsung Electronics Co. Ltd. The stock is up close to 40% on a year-to-date basis and makes up more than 22% of the total fund’s holdings.

For ETFs that invest in South Korean companies, click here.

The price of natural gas futures soared 3.8% to $3.04 per million BTU on Tuesday after the U.S. Energy Information Administration released a positive short-term outlook on energy. EIA expects inventories to hit 3,940 Bcf by the end of October 2017, which is 2% higher than the five-year average. Another report also announced that U.S. liquefied natural gas exports will quadruple this year to 1.9 billion cubic feet per day. This comes after President Trump met with European leaders to promote the dominance of U.S. energy.

This caused readership to increase in natural gas 80% for the week. Investors looking to gain exposure to natural gas could look to the United States Natural Gas Fund ETF (UNG B-). The fund has over $418 million of assets under management and invests in natural gas futures and closely mirrors the price movements of the actual commodity. During the last week, the fund was up 1.80%. However, like the actual price of natural gas, UNG has not performed well over the longer term. On a year-to-date basis, the fund is down 27.41% and down 15.36% on a trailing one-year basis.

To view all the ETFs in the natural gas area, click here.

Transportation Shows Upside, Thanks to Airlines

The fourth-most trending topic that is up 76% for the week was centered on transportation, thanks to the airline industry. On Wednesday, shares of United Continental (UAL) were up sharply after the company announced a more positive outlook for next quarter. An analyst from Oppenheimer also noted that airline stocks are among the best picks in the market right now and he favors companies like American Airlines (AAL), Southwest Airlines (LUV) and Delta Air Lines (DAL). While AAL remains bullish on its expectations for unit revenues for the rest of 2017, substantial dividend increases from DAL and LUV recently supports their financial strength.

To gain exposure to the airline industry as a whole, one could look toward the iShares Transportation Average ETF (IYT A+). The fund contains over 23% in airline stocks and currently owns positions in airlines like Alaska Air Group Inc. (ALK), UAL and LUV. Despite having these airlines, which were all up for the week, the ETF is down 0.42% for the same time period. This was primarily due to exposure to other segments of the transportation industry. To be specific, there was a slight weekly decline in logistics leader United Parcel Services (UPS) and other transportation players like Union Pacific (UNP) and J B Hunt Transport Services Inc (JBHT) – all of which make up nearly 20% of the ETF. On a year-to-date basis, the fund is up 6.73% and up 26.22% for the trailing one year.

The last trending topic of the week was centered on the automotive industry, which showed an increase of 67% in viewership. While most of the indices are invested in the major car manufacturers like Ford (F) and General Motors (GM), Tesla (TSLA) was the one company that garnered attention this week. On July 3, Tesla’s leadership announced it delivered 22,000 vehicles in the second quarter, the very low end of the guidance for the quarter. As a result, investors felt the stock was overvalued, plummeting it by more than 13% from July 3 to July 7. However, the stock is still up over 50% on a year-to-date basis.

Investors looking for a diversified way to gain exposure to the entire automotive industry should consider the First Trust NASDAQ Global Auto Index Fund (CARZ B). This is the only pure-automotive ETF in the market and currently has $18.5 million in assets under management. The fund has exposure to 35 holdings, including GM, Ford and Tesla. In the last week, the fund has shown little change, up only 0.30%. On a year-to-date basis, the fund is up 9.74%, and up 23.47% for the trailing one-year.

This week, thanks to Boeing and Lockheed Martin, the aerospace and defense sector was the most trending topic for the week. On the same page, South Korea was not far behind, as its intelligence agency refuted that the North Korean test missile fired last week did not have a viable re-entry system. Thanks to a positive outlook from the EIA, the price of natural gas spiked. Transportation showed interest from investors thanks to the recent upgrade of airline stocks. Finally, with Tesla missing its expected deliveries, the automotive sector was in investor’s minds.