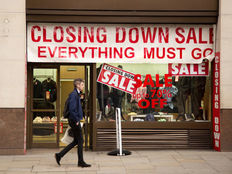 This Week's ETF Launches: Betting on the Demise of Retail

The pace of new ETF launches finally slows this week, following a busy November that has seen the debut of nearly 40 new funds.

With the holiday shopping season in full swing, it’s appropriate that the most notable launches this week both look to profit from the ongoing decline in the traditional brick-and-mortar retail sector.

The retail sector has been a fascinating case study of who has and who hasn’t been able to adapt to a changing economic climate. As the migration away from traditional in-store shopping and toward a completely online experience continues, some retailers have positioned their businesses better than others. Amazon (AMZN), which has had the singular focus of dominating just about every aspect of online retail, has seen its stock skyrocket nearly 1,400% over the past 10 years. Walmart (WMT), which has seen its huge investments in its e-commerce business start to pay dividends, is up more than 70% over the past two years. It’s the retailers that are still heavily reliant on the brick-and-mortar operations, however, that have suffered. Over the past two years, Target (TGT) is down 18%; Macy’s (M) is down 42%; and JC Penney (JCP) is down 60%.

Enter ProShares. They’ve devised a pair of new ETFs designed to profit from the suffering of these brick-and-mortar retailers. The ProShares Long Online/Short Stores ETF (CLIX B+) utilizes a long-short strategy that attempts to benefit from both the boom in online retail and the decline of in-store retail. The fund takes a 100% long position in the ProShares Online Retail Index, a collection of just under two dozen companies that specialize in the online channel. Simultaneously, it takes a 50% short position in the Solactive-ProShares Bricks and Mortar Retail Store Index. This index comprises a group of companies that receive at least 50% of their revenues from retail operations. In addition, the companies should also derive at least 75% of their retail revenues from in-store sales.

The ProShares Decline of the Retail Store ETF (EMTY ) works a bit differently. It bets solely on the decline of the brick-and-mortar space by using futures contracts to produce the inverse of the daily returns of the aforementioned Solactive-ProShares Bricks and Mortar Retail Store Index. The index measures the performance of 56 retail companies, including big names such as Sears (SHLD), Kroger (KR), Home Depot (HD) and Best Buy. Both funds carry expense ratios of 0.65%.

The IBD 50 ETF Switches From Active to Passive

The Innovator IBD 50 ETF (FFTY B-) has accumulated more than $200 million in assets thanks to the popularity of the underlying IBD 50 list and a 45% year-to-date gain for the fund. Prior to a few weeks ago, the fund was technically an actively managed ETF although it pretty much replicated the composition of the IBD 50. This month, it officially transitions to an index fund, following the IBD 50 Index. What kind of changes can investors expect with the move?

Probably not many. The fund was pretty much replicating the IBD 50 before, but, going forward, it will officially track the index. The IBD 50 is a growth-oriented, momentum-based list of companies that score highly in factors, such as relative price strength, sales growth and return on equity. The ETF’s expense ratio, interestingly, will not change, despite becoming a passively managed fund.

The decline of traditional retail has been a popular talking point in the markets for some time now, so it’s not surprising that the ETF marketplace, which doesn’t lack products targeting narrow niches or trends, is capitalizing. The decision by ProShares to launch two products, which may seem to be substantially similar on the surface, is potentially a solid move. While one bets on the decline of brick-and-mortar retail, the other attempts to profit in both directions, something that may be appealing to more aggressive investors.

ETFdb.com has ETF investing guides and other e-books to help you navigate the investing landscape using ETFs. Sign up to ETF Database Pro to get access to all the PDFs located on our ETF Guides page.