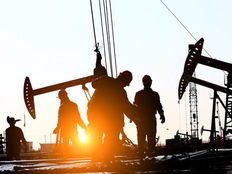 U.S. President Donald Trump managed to deal another blow to the markets by deciding to withdraw from the Joint Comprehensive Plan of Action, best known as the “Iran deal”, causing oil to spike to levels not seen in more than three years.

Technology giants, united under the acronym FANG, continued to trend due to robust financial results for the last quarter while pushing investors toward the broader sector of tech equities in search of opportunities. The U.S. dollar came in fourth on the list, propelled by Treasuries, especially the 10-year bond yield, which stayed beyond the 3% threshold. The ever-increasing demand for lithium in this battery-reliant world economy closed out the list.

The prospect of an unraveling Iran deal had oil markets react vigorously over the last few weeks, sending crude prices to a multi-year high and prompting diplomats to step up their efforts aimed at avoiding a new crisis in the Gulf. This caused a 220% surge in viewership for crude oil as investors were somewhat surprised by the announcement, which actually came earlier than anticipated.

In complete disagreement with its allies Britain, France and Germany, as well as the other two co-signers of the deal, China and Russia, the U.S. administration decided to exit the Iran deal, which was struck in 2015 and aimed at reducing the country’s nuclear capabilities. The deal was scrapped due to alleged terrorist activities in Middle Eastern countries like Syria and Yemen as well as its continuous procedure of dodging its obligations to expand the nuclear program beyond the agreed civilian purpose.

The order signed on Tuesday by Trump imposes restrictions on new deals with Iranian counterparts and grants companies operating in the U.S. 90-day or 180-day grace periods to extract themselves from existing Iranian contracts or face punitive U.S. measures. Regarding oil, petrochemicals and shipping, sanctions enforcement would begin on November 4 and their effect depends on how non-American businesses and foreign governments respond, whether they are granted exemptions by the U.S. Treasury Department or decide to risk U.S. penalties.

The impact of U.S. sanctions is difficult to gauge due to the complexity and overlapping nature of the sanctions regime, but they are estimated to reach as much as 800,000 barrels per day if OPEC and Russia do not make up for the reduction. The oil cartel and Russia are withholding a total of 1.8 million barrels per day of crude from the market as part of their agreement to ensure a stable environment but could end their production curbs to compensate for the loss of Iranian supplies.

Investing in oil seems attractive to investors at the moment and the ProShares Ultra Bloomberg Crude Oil (UCO A) offers 2x daily leverage to an index that consists of crude oil futures contracts, making an investment based on political events even more appealing. The ETF has posted an impressive 35% performance for the year and is expected to continue in the same manner as demand is at record highs in Asia, with new refineries opening in China and Vietnam.

The most important companies of the last decade, also known as the FANGs, reported sound financials for the last quarter. This included even the likes of Facebook, a company embroiled in a data breach scandal that took a heavy toll on the company’s image. FANG ETFs have seen their viewership advance by 118% as investors dismissed worries regarding possible negative effects on these companies after two weeks of extremely encouraging earnings numbers.

Netflix (NFLX) was first to announce record additions of 7.4 million net-streaming customers worldwide and an optimistic future guidance for the second quarter. Facebook proved that it has the power to withstand the data security hitch and presented its strongest first quarter ever, with a 49% jump in revenue and a 63% rise in income, both relative to the first quarter of 2017. Then Amazon (AMZN) displayed jaw-dropping earnings, which boosted shares by 7%, despite Donald Trump’s criticism of the company and its CEO. Alphabet (GOOG) continued to grow its advertisement business as paid clicks were up by 59%, while cost-per-click was down 7% from a year earlier in what seems to have formed a trend in the advertising system.

Lastly, Apple (AAPL) announced its results for the quarter ending March 31, and the numbers beat expectations, as has happened in 20 out of the last 21 quarters. However, the report was balanced, with revenue hitting $61.1 billion, a 15.5% gain, but iPhone sales were slightly below estimates while still managing to advance by just 3%.

ProShares UltraPro QQQ (TQQQ B) is an excellent investment vehicle for short-term positioning as if offers tech bulls a 3x daily long leverage to the NASDAQ-100 Index. It performed spectacularly over the last week, jumping 8.34%, but should be regarded as a risky asset due to its leveraged build.

Technology Equities in the Spotlight

Aside from the FANGs, the broader tech sector enjoyed renewed interest from investors, pushing traffic in Tech Equities up by 94% as investors looked to diversify and accumulate exposure to other corporations that have otherwise lost their glow over the last decade.

Microsoft’s (MSFT) push into cloud computing delivered solid financial results with revenue leaping 16%. Sales for its intelligence cloud unit grew 17% to $7.9 billion over the last quarter. Microsoft’s Azure cloud-computing business rose 93%, but the positive figures were largely overshadowed by Amazon’s strong results released on the same day. Microsoft continues to perform on its personal computing business segment as well, with products like Windows, Surface computers and the Xbox rising 13% year-over-year to $9.9 billion in sales.

iShares U.S. Technology ETF (IYW A-) offers exposure to the likes of Microsoft and Intel (INTC), another company that has outdone itself this quarter. The U.S. chipmaker has set new records, with revenues of $16.1 billion, up 9% from a year ago. Meanwhile, operating income leaped 23% to $4.5 billion, and net income rose 50%. The ETF gained 6.4% over the last seven trading days.

Flows Into the U.S. Dollar Continue to Support the Upward Move

The greenback shines again after a forceful decline that started in early 2017. The robust financial environment and healthy job market propelled yields to levels briefly touched in late 2013, and before that, in mid-2011. Traffic to the U.S. dollar almost doubled due to investor interest in the upsurge for the U.S. currency.

A series of factors are at the source of this renewed appetite for the greenback. U.S. 10-year Treasury yields edged beyond the 3% mark and lately signaled that the move could extend in the coming weeks as political uncertainties mount and investors rush into safe havens. However, unlike the Japanese yen or the Swiss franc, the buck is at present supported by a much stronger and resilient economy, where interest rates are on an ascending path.

The dollar spiked 4% against other major currencies since mid-April, as investors are pouring funds into dollar-denominated assets. Data shows nearly $3 trillion is now invested in U.S. fixed-income funds and ETFs, the highest level in more than five years.

PowerShares DB US Dollar Bullish Fund (UUP A) is a great tool for those seeking to take advantage of the greenback’s restored clout. It follows a basket of currencies inversely and relies heavily on a depreciating euro for its performance. It thrived over the last month, rising 4% as the ECB struck a dovish tone at its last meeting. The ECB restrained from signaling an eagerness to raise rates as inflation is dropping and the economy is weakening.

With billions invested and much more in the pipeline for the impending expansion of the battery and material manufacturing facilities around the globe, lithium stands to emerge as the essential ingredient of the new green energy era. As such, interest in lithium rose by 61% over the last week.

The top holding of the Global X Lithium ETF (LIT B-), FMC (FMC) posted a strong quarter, boosted by its lithium business as well as last year’s purchase of a portion of DowDuPont’s crop protection division. The Philadelphia-based specialty chemical company’s revenue soared 103% year-over-year, while its lithium business spiked by 57% compared to the same quarter last year. The corporation cited the further development of the lithium operation due to a favorable environment, with demand growth continuing to outpace supply.

The ETF recouped some of the losses suffered in 2018 so far, and it looks on track to stabilize and move higher as the production of batteries for electric vehicles and advanced lithium-based residential energy storage systems ramps up.

The dismantling of the Iran deal has pushed oil prices to a four-year high while rising demand in Asia and a troubled South American oil company added upward pressure. The stars of the tech sector lived up to expectations and performed remarkably over the last quarter, as did the entire tech sector, in no small part due to strong global growth and enticing fiscal policies in the U.S. The U.S. dollar lures funds from all over the world with rising yields, inflation and wages on the back of a sturdy economic expansion. Finally, lithium appeared on the radar as demand for batteries is flourishing despite a fall in unit production cost.