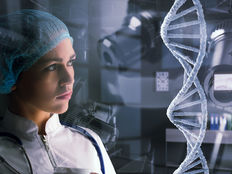 UK Biobank, an international health resource and charity, is leading the charge in what is the world’s largest genetics project, which should put the ARK Genomic Revolution Multi-Sector ETF (ARKG A-) on watch for investors.

Per a Technology Networks report, “The biobank recruited 500,000 volunteers aged between 40–69 years from across the country and collected a variety of biological measures and data from them, including blood, urine and saliva samples. Self-report data regarding lifestyle and medical history was also obtained, and the participants agreed to have their health tracked.”

The primary goal of the project is to collect data in order to best determine the pathophysiology and heterogeneity of human diseases. In essence, to track why certain diseases are more prevalent in certain individuals.

“I am incredibly excited by the potential of genomics to change the way we think about disease and healthcare,” said Matt Hancock, UK Health and Social Care Secretary. “In an ageing society with an increasing burden of chronic diseases, it is vital that we diagnose earlier, personalise treatment and, where possible, prevent diseases from occurring altogether.”

Biobank is already extrapolating valuable information from its current projects.

“One of the discoveries has been a better understanding of Type 1 diabetes,” said Sara Marshall, Head of Clinical and Physiological Sciences. “This is the commonest form of diabetes in children, which has led to it being called ‘juvenile diabetes.’ However, a study using information from UK Biobank revealed that Type 1 diabetes is almost as common in adults as it is in children. This hasn’t been recognized previously because so many adults have a different kind of diabetes.”

ARKG seeks long-term growth of capital. The fund is an actively-managed fund that will invest under normal circumstances primarily in domestic and foreign equity securities of companies across multiple sectors, including healthcare, information technology, materials, energy and consumer discretionary, that are relevant to the fund’s investment theme of the genomics revolution (“Genomics Revolution Companies”).

Robotics and artificial intelligence (AI) are typically associated with disruptive technology and before long, this technology could represent standard fare in all industries. Genomics, the study of genomes, is also taking its own revolutionary steps as a disruptor, particularly in the health care industry.

For investors who missed out on the serendipitous run of FAANG (Facebook, Amazon, Apple, Netflix, Google) stocks, they can look to capitalize on disruptive tech options in 2019 like genomics. The actively-managed ARKG seeks long-term growth of capital by investing in domestic and foreign equity securities of companies across multiple sectors, including healthcare, information technology, materials, energy and consumer discretionary, that are relevant to the fund’s investment theme of the genomics revolution.