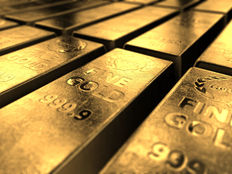 The third quarter of 2019 saw heavy inflows into defensive sectors of the market, especially into gold and long term Treasurys, as investors sought out safe haven assets amid the economic and political turmoil abounding.

Utilities and consumer staples also continued to perform, while trade sensitive cyclical names such as metals, energy, medical materials, and retail stocks all lagged along with healthcare, which was dragged down by biotech.

Gold especially had a significant run, breaking through technical resistance levels as investors ran for cover as interest rates dropped in fixed income and stocks foundered.

“We’ve seen this trend from the beginning of the year, where the US has interest rates coming down and new interest rates are coming down across the world. And that’s not a great thing for anybody in the fixed income market. But for those looking for more defensive positioning, gold is something that has really benefited from that. You know, China trade talks, more broad uncertainty or just helping along that story,” said Will Rhind, founder and CEO of GraniteShares on CNBC.

The GraniteShares Gold Trust (BAR A-) and the SPDR Gold Shares ETF (GLD A-) are two options investors looking to use ETFs to participate in the gold market might consider.

“The more that the Fed cuts rates, the more attractive that gold as a zero yielding asset class becomes. And it’s not just gold. It’s silver. It’s other precious metals that people like the defensive properties. But if interest rates aren’t paying that much it doesn’t hurt to hold gold or silver,” said Jay Jacobs, head of research and strategy at Global X ETFs.

Tim Seymour, founder and chief investment officer of Seymour asset management agrees that gold could be a good bet going forward, although could be held up by technical factors.
“It’s interesting also. What these guys aren’t talking about is a technical argument for gold too. I mean gold took three or four years to consolidate through a level that had been major major resistance. And you can make an argument and you can look at the rest of the precious metal space. And it’s alive and well. Palladium is at all time highs. People are playing gold silverware shoes. The one caveat it is though I think is that you have this sense that we may have had that blow-off top, and I’m not necessarily making a call, in August in terms of rates were. I think it’s going to be a headwind for gold in the short term,” Seymour said.