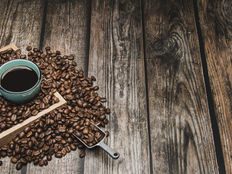 Coffee prices and related exchange traded note surged Friday after Brazil’s top grower warned it was running out of beans to fill any new orders.

The iPath Series B Bloomberg Coffee Subindex Total Return ETN (JO B-) jumped 3.6% on Friday as ICE coffee futures advanced 3.0% to $9.57 per pound.

“Funds are overselling coffee in New York while in the physical market there’s no more supplies and demand has been strong,” Lucio Dias, commercial director at Minas Gerais-based cooperative Cooxupe, told Bloomberg. “We don’t know where the world will get coffee in the next six months.”

Cooxupe previously calculated it would gather 5.7 million bags of arabica coffee this year but only 4.9 million bags have come in so far. About 65% of the amount was already sold and farmers typically hold on to around 20% in case prices go higher. Despite the record amount of Brazilian coffee shipments, global inventories are still declining, Dias said.

This supply side concern comes as a surprise in a coffee market that has been suffering from a global supply glut. Futures trade in New York have plunged about 40% from a September 16 peak amid ample supplies, notably from a bumper crop year in Brazil. over the first nine months of the year, Brazil exported a record 27.4 million tons of green coffee, or a 30% increase year-over-year, according to CeCafe.

“The inventories from the previous crop were big so that the volume in warehouses is still high even amid this fast pace of exports,” Luiz Alberto Azevedo Levy Jr., superintendent director at Dinamo, told Bloomberg.

However, Levy warned that given the pace of shipments, a more significant depletion in inventories could occur in the second quarter of next year before the new harvest.

Brazil’s current production fell short of expectations this year due to weather damage that hurt bean development over the first quarter while strong exports drew down inventories as the current crop goes into the lower-yielding half of a two-year cycle.