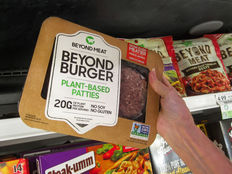 Beyond Meat Sinks On End Of Lock-Up

Wall Street was generally bullish on Beyond Meat (BYND) after the alternative meat producer released news of a much bigger profit than expected, but analysts cautioned that the fundamentals may not matter right now despite the company’s once furious upward trajectory, as insiders may intervene.

Tuesday was the end of the lock-up period, or first time since the IPO was released that insiders are able to sell the stock, which could generate some short-term pressure, analysts said. Roughly 75% to 80% of the outstanding stock is available to trade after the lockup expiration.

Beyond Meat Inc. stock closed down more than 22% Tuesday. Other factors sinking the stock include analyst feedback suggesting that the Canadian P.L.T. (plant, lettuce, tomato) trial at McDonald’s Corp. has not been greeted with a resounding response as well as the end to the stock lockup.

On a call with analysts, Chief Executive Ethan Brown impressed upon analysts the importance of the food service partnerships Beyond Meat has entered into. This partnerships include Subway, the largest restaurant chain in the world by the number of locations, KFC, Dunkin’ Brands Inc. (DNKN), which recently expanded the Beyond Breakfast Sausage sandwich to 9,000 locations, and McDonald’s (MCD).

“This important step reflects a dream becoming reality,” Brown said, according to a FactSet transcript of the earnings call. “We’ve long had our sights on ubiquitous availability for Beyond Meat, and years ago, I set a goal that my own children would be able to go to major fast food chains and order Beyond by the time they could drive.”

Nevertheless, whether or not the product will land on the McDonald’s menu is still a question mark.

“Based on our channel checks with select McDonald’s based in Ontario, Canada that are currently testing the Beyond P.L.T. burger, the initial feedback has been largely positive, although it seems that the trial has not been a blowout success thus far that justifies an immediate nationwide rollout across both Canada and the U.S.,” Bernstein said.