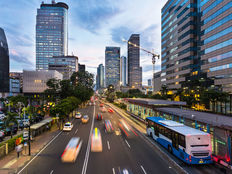 SmartETFs Funds launched a new, actively managed transportation and technology ETF on Friday that invests in companies believed to benefit from the current revolution in transportation.

The SmartETFs Smart Transportation & Technology ETF (MOTO) seeks long term capital appreciation from investments involved in the manufacture, development, distribution, and servicing of autonomous or electric vehicles and companies involved in related developments or technologies to support autonomous or electric vehicles including infrastructure, roadways, or other pathways.

Jim Atkinson, CEO for Guinness Atkinson Asset Management, which manages SmartETFs, spoke to ETF Trends about MOTO and how it will adapt to changes in the technology sector.

The technology demands for autonomous and electric vehicles are high and the competition to win, particularly in the autonomous challenge, is fierce, Atkinson stated.

“It is very difficult to pick the winners in this competitive challenge,” he said. “We know some firms have an obvious lead, most notably Waymo and Tesla in autonomous technology and Tesla in the EV space. But how this plays out over the next decade is hard to predict.”

Atkinson added how this is one reason SmartETFs believes an actively managed strategy is preferable. Their style is low turnover, but the managers are acutely aware of these challenges and will seek to position the portfolio to take advantage of developments over time.

In discussing how MOTO is a progressive ETF looking at future revolution, Atkinson also noted how he believes a transportation revolution is underway.

“We’re at the beginning so it doesn’t look like much at the moment but as EVs gain market share and self-driving vehicles begin to be deployed in larger numbers our entire system of transportation may change,” he said. “The combination of electric autonomous vehicles and application-based ride-hailing may mean an end to the own and drive transportation model. The average automobile in the US is idle 95% of the time.

“A more efficient utilization means a cheaper, safer and more convenient alternative. It isn’t entirely clear where this revolution is headed but the direction of travel is for safer, cleaner, cheaper and better transportation.”

Related: China Technology ETFs Could Be a Value Opportunity

As far as where this ETF fits in a portfolio and who it’s for, Atkinson explained that MOTO is for investors who recognize the changes coming in transportation. That said, this is not a core holding and most investors that want to invest in the smart transportation revolution will likely want this as a small portion of their overall portfolio.