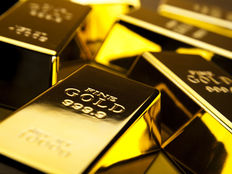 Gold’s status as a safe-haven has taken some punishment in recent days, but some market observers believe ETFs, including the iShares Gold Trust (IAU A-), are due to shine again.

Gold is often perceived as a safe haven asset for investors, and with Thursday’s plunge in prices, as global stock markets crash yet again, there is evidence that investors have taken shelter by converting the precious metal into cash as is intended to be done with a safe haven asset.

While it feels like no market is safe, low real interest rates, among other factors, bode well for gold’s longer-term outlook and that bolsters the case for IAU and gold ETFs. Those other catalysts include the weaker greenback.

“The Dollar Index (DXY) is down nearly 3% since the market’s mid-February peak,” said BlackRock in a recent note. “This is important as gold’s efficacy as a hedge is partly a function of the dollar. While gold can do well even when the dollar is rallying, historically it’s outperformance is strongest when the dollar is down.”

As the coronavirus outbreak continues to be the wild card in the markets, the safe haven of precious metals is in high demand, especially for exchange-traded funds (ETFs) that are backed by gold. ETFs have been stockpiling gold as more coronavirus news continues to invade the financial markets.

Additionally, slowing growth, which data points confirmed as having arrived, increases the case for bullion and related ETFs.

“Gold tends to do best when investors are worried about too little growth. For example, in month’s when volatility spiked and the ISM New Orders Index, a survey of manufacturing activity, rose the median return to gold versus stocks was 2.75%. If you instead focus on periods when the ISM was falling, suggesting a decelerating economy, the median return increased to 5%. In those months when the ISM Survey was falling particularly fast, as it is today, the median return versus stocks increased to over 8%,” according to BlackRock.

Lower interest rates, which are driving real yields lower, are also making a strong case for gold, which is historically inversely correlated to lower rates.

“Historically, the direction of real rates has had the highest correlation with gold’s performance. Since the onset of the financial crisis, this relationship has only strengthened,” notes BlackRock. “During the past decade, changes in real interest rates have explained more than 30% of the change in the price of gold. As a rough rule of thumb, every 0.10% drop in real rates coincides with about a 1.25% increase in gold. Based on this relationship, gold’s poor performance during the week of the 24th should continue to reverse.”