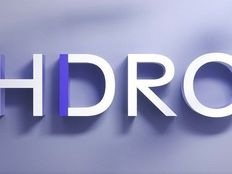 Defiance ETFs announced Wednesday that it is launching the Next Gen H2 Fund (HDRO), the first hydrogen ETF in the U.S. Listed on the NYSE, HDRO will give investors exposure to companies involved in the development of hydrogen-based energy sources and fuel technologies. The fund comes with an expense ratio of 0.30%.

According to the prospectus, HDRO’s underlying index, the BlueStar Hydrogen & NextGen Fuel Cell Index, can include up to a 15% weight in non-pure play companies, though it does not include vehicle manufacturers. To be eligible, companies must meet size and liquidity requirements that can be drawn from developed and developing markets.

“We’re already starting to see hydrogen take on a larger role as a viable energy source,” Defiance ETFs President Paul Dellaquila said. “We believe that as governments and corporations continue to demand renewable energy sources and adopt more environment-friendly policies, Hydrogen will be a pivotal resource to help fuel a cleaner economy.”