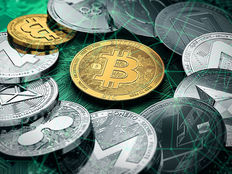 BITQ tracks an index designed with Bitwise’s industry expertise to identify the pioneering companies that generate most of their revenue from their crypto business activities. It’s a traditional ETF. Blockchain companies have rallied as cryptocurrencies come back under the limelight, and BITQ was among the better-performing ETFs of the past week.

Blockchain sector-related exchange traded funds surged on rumors that Amazon plans to accept cryptocurrencies as payment. According to an anonymously sourced report in the London newspaper City A.M., Amazon has plans to accept the cryptocurrency Bitcoin by the end of 2021.

This isn’t just going through the motions to set up cryptocurrency payment solutions at some point in the future. It’s believed that this is a full-on, well-discussed, integral part of the future mechanism of how Amazon will work.

The insider stated that Bitcoin would be the first of eight cryptocurrencies Amazon could accept. The report also claimed that Amazon’s crypto plans have been in the works since 2019, and it “won’t take long” for the company to fully accept crypto as a form of payment for its online transactions.

Amazon could even begin developing its own cryptocurrency, allowing shoppers to earn rewards for paying through Amazon’s “native coin.” Adding to this speculation, Amazon revealed it was hiring a cryptocurrency expert. Plus, Amazon is advertising for a “digital currency and blockchain product lead” to look at “how Amazon’s customers pay.”

Elon Musk has hinted at how much Bitcoin Tesla holds after a Twitter user shared a rough estimate of its holdings. Dave Lee suggested Tesla should be holding 42,069 in Bitcoin and that the total holding may amount to $1.47 billion. Musk said that “we don’t have that many Bitcoin, but it’s close.”

“I wanted a little bit more due diligence to confirm that the percentage of renewable energy usage is most likely at or above 50% and that there is a trend towards increasing that number, and if so, Tesla would resume accepting bitcoin,” Musk said.

Twitter CEO Jack Dorsey confirmed to investors that Bitcoin would be a “big part” of the company’s future. He sees opportunities to integrate the cryptocurrency into existing Twitter products and services, including commerce, subscriptions, and other new additions like the Twitter Tip Jar and Super Follows.

BITQ offers investors a “picks and shovels” approach to investing in the crypto economy. It offers exposure to the fast-growing Bitcoin and crypto economy without the complications of owning cryptocurrencies like Bitcoin directly.

As noted, the fund tracks the Bitwise Crypto Innovators 30 Index. At least 85% of the index is focused on pure-play crypto companies, including Bitcoin and crypto trading venues, crypto mining and mining equipment firms, and service providers. Examples include Coinbase (COIN), Silvergate Capital (SI), and MicroStrategy (MSTR).

Listen to the full podcast episode on BITQ: