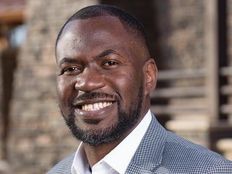 Emlen Miles-Mattingly Aims to "Change the Complexion of Wealth"

Emlen Miles-Mattingly into financial planning by “complete accident.” Before starting his own financial planning firm, the founder and CEO of Gen Next Wealth worked in banking — which he got into by trying to sell a bank manager a DirecTV.

“So, initially when I’m leaving the bank to be an advisor, I figured, ‘I’ve been a bank manager for five years, I’ve been successful, I should be able to transition,’” he explained. “But apparently, I didn’t have all the qualifications. So, when I interviewed, they all tuned me down.”

Eventually, Miles-Mattingly became a financial advisor at Principal Financial Group. But there, he soon discovered that the company’s business model centered on selling the product, not educating or guiding the client on how that product worked.

“At Principal, you get paid when you sell a product. But after I’d sell an insurance product, the customers would still have questions,” he said. “So, I’d spend a lot of time talking to these people, but not getting any compensation. I realized I needed to change the way I’m doing business.”

So, in 2017, he launched his own firm to help the people he wanted to help. At Gen Next Wealth, Miles-Mattingly focuses on working with minority families and first-generation college graduates making six figures “that were formerly do-it-yourselfers who can’t do it themselves anymore.”

“Typically, when a first-generation college graduate is accumulating assets, what they want to do now is more complex than the thing that they’ve normally done,” Miles-Mattingly explained. “I’m finding with a lot of people that just because they are educated doesn’t mean they have the financial education to match their academic education.”

But after starting Gen Next Wealth, Miles-Mattingly realized that people still needed information. So, he launched the Minority Money podcast in 2018 to “provide bite-sized information to people, specifically targeting minorities.”

In addition to running Gen Next Wealth and hosting the Minority Money podcast, Miles-Mattingly recently teamed up with Berknell Financial Group founder Dasarte Yarnway to form Onyx Advisor Network, an entrepreneurial support platform for minority-led financial advisory firms. The network is designed to help historically underrepresented advisors start, scale, and sustain their practices by providing them with a community of like-minded advisors, and access to compliance solutions, custodians, coaching development resources, and several other technology resources.

Miles-Mattingly feels that it’s essential that he help people of color and high-income earners with no invested assets build their wealth and plan their financial futures “because no one else is doing it.”

“I see myself in my clients. I know what it’s like to not understand my financial products, to not know things people think I should already know,” he said, noting that “there’s no place in the financial services industry” for people who don’t know the difference between an IRA and a 401(k) or what a mutual fund is.

“If you can teach these people, I think you can improve the wealth of the nation,” Miles-Mattingly added.

While helping clients build and develop their portfolios, Miles-Mattingly said that some ETFs he likes to use include the Vanguard Large Cap ETF (VV A-), the SPDR Portfolio S&P 500 Growth ETF (SPYG A-), the Schwab Fundamental US Large Co. Index ETF (FNDX A), and the Main Sector Rotation ETF (SECT B-).

The Gen Next Wealth founder revealed that one of his biggest joys in this business is seeing “that ‘ah-ha’ moment” in his clients’ faces when they understand what they’re investing in and how their investment vehicles work within their portfolios. “When they go, ‘Ah-ha, this makes sense,’ there’s nothing like that,” Miles-Mattingly said. “Everything I do is for that moment.”

For Miles-Mattingly, the long-term goal with his financial planning endeavors is “to change the complexion of wealth and get more messengers out.”

“There has to be more people like me running financial practices impacting their communities. That’s the ultimate goal,” he said. “Imagine having 500 advisors from an underrepresented background serving 100 clients apiece. We’re teaching families about managing generational wealth. That’s the impact.”

Miles-Mattingly added: “I think the industry’s ready for it. We have a lot of support. Things are changing.”