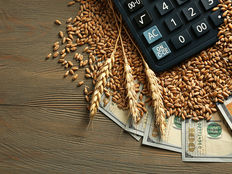 ETF Trends’ CEO Tom Lydon discusses the Invesco DB Agriculture Fund (DBA A) on this week’s ETF of the Week podcast with Chuck Jaffe of the MoneyLife Show.

The combination of inflation and the tensions between Ukraine and Russia is creating a difficult scenario for markets. CPI has risen 7.5% in the last 12 months and is being felt by consumers at the gas pump, in the housing market, and at the grocery store, Lydon explains. The invasion of Ukraine by Russia is set to impact global agriculture and drive prices even higher.

“The good thing is, we don’t depend on Russia for food; they are actually an importer,” Lydon says. On the flip side, “the price of fertilizer just went up because one-fifth of the fertilizer and the component for fertilizer, potash, that we get into the U.S. comes from Russia.”

The Invesco DB Agriculture Fund (DBA A) is a combination of futures within several areas of agriculture, including wheat, soybeans, coffee, corn, cattle, cocoa, sugar, hogs, and cotton. It’s a smart play for investors who believe that commodity prices will continue to rise and who are also seeking to diversify their portfolios away from traditional stocks and bonds at a time of rising interest rates and market volatility.

Jaffe points out that this is a fund that hasn’t done well in eight out of the last 10 years and that it is an ETF investors get into for its current performance compared to its 200-day moving average, which it has been above for the last year.

“Commodities, in general, have been a bad investment for a long period of time; now, things have changed. We really haven’t seen commodities increase this fast since the late 1970s,” Lydon says, explaining that they consistently performed strongly for several years. “The big question is, is this the development of a new trend, and a trend that may be with us for an extended period of time?”

With current political tensions, markets are much less certain of Fed interest rate increases in their upcoming meeting this month; previous estimates were anticipating a 0.50% increase or more, but now, some are expecting only a 0.25% increase, if any, Lydon explains. While a pass on an interest rate increase this month by the Fed would prove beneficial for stocks and bonds, it would be much less so for inflation-hedged investments, such as commodities.

“If you feel that agriculture might be under more pressure than anything else, or you want to protect your buying power at the grocery store, this is something to consider,” Lydon says. “The trend is firmly in place; putting an allocation of 5% into this ETF and holding it as long as it’s above its trendline makes a heck of a lot of sense.”