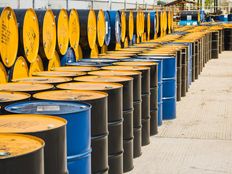 After recently reaching their highest levels in nearly a decade, crude oil and related ETFs continued to retrace on Monday, falling another 8%, and breaking below $100 per barrel, amid discussions between Russia and Ukraine, as well as fears that fresh coronavirus restrictions in China could hurt demand.

Although you could hardly tell from prices at the pump, crude oil has been falling recently, after its massive spike to over $130 per barrel.

On Monday, U.S. benchmark West Texas Intermediate crude futures fell as much as 8.75% to reach $99.76 per barrel, before rallying slightly to $103 per barrel as of 1:30 PM EST. Meanwhile, international bellwether Brent crude also tumbled 8% to $103.68 per barrel.

Of course, the moves have done little to ease the minds and wallets of consumers, who are still paying exorbitant gas prices across the nation.

President Joe Biden announced on Tuesday that the U.S. would ban all imports of Russian oil, gas, and energy, in an effort to curtail “Putin’s war machine.”

Gas prices notched $4.17 for a gallon of unleaded that same day, breaking the previous record of $4.10 set in July 2008, according to AAA. Meanwhile, in places like California, customers are paying over $7 per gallon in parts of Los Angeles and other areas, adding to existing trepidations over inflation.

The crude oil market has been experiencing volatility for some time now, which has only been exacerbated by the war in Ukraine. Yet, even with Monday’s fall, both Brent and WTI are over 30% for the year.

“We have a demand scare for the first time in a while,” said John Kilduff, partner at Again Capital. “The Covid lockdown in China has spooked the market,” Kilduff added, noting that high fuel prices around the world are also causing demand destruction.

The recent pullback could be good news for ETF traders who favor crude oil and are looking for a chance to get on board. Crude ETFs like the United States Oil Fund (USO A) and the ProShares Ultra Bloomberg Crude Oil (UCO A) could potentially see massive gains, while short ETFs like the ProShares UltraShort Bloomberg Crude Oil (SCO A+) could suffer with rising prices.

For investors looking for crude ETFs to play the run-up in oil, which has been fairly steady since November, the United States 12 Month Oil Fund (USL B+) and the iPath Pure Beta Crude Oil ETN (OIL B+) are two other funds to consider.